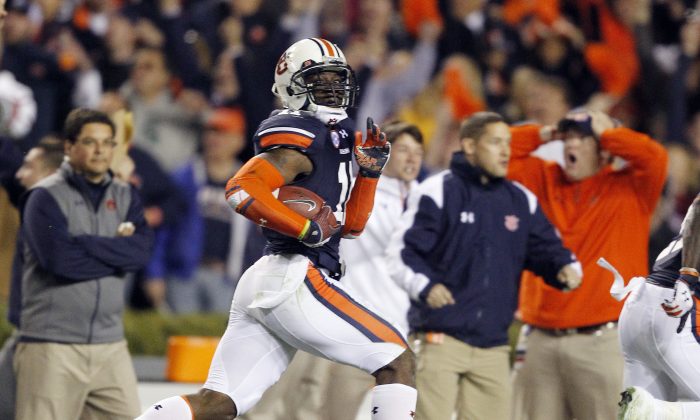 Auburn cornerback Chris Davis (C) returns a field goal attempt 109 yards at the end of a game between the Tigers and the Alabama Crimson Tide to vault Auburn into the SEC title game. (AP Photo/Butch Dill)
College Sports

This season’s exciting Iron Bowl finish, featuring Auburn’s 109-yard missed field goal return for a touchdown with no time left to win the game, was an instant classic. But where does it rank among the best college football endings of all time? Here are the five best finishes since 1980:

5. Colorado/Michigan 1994—Two powerhouse programs (yes Colorado was actually good at one time) were matched up as the seventh-ranked Buffaloes traveled to Ann Arbor to face the fourth-ranked Wolverines in late September.

Fast-forwarding the fourth quarter, Colorado scored a touchdown with 2:16 left to pull within 5, 26–21. The Buffaloes then got the ball back with 15 ticks left but after running one play, they still needed to go 64 yards with just six seconds remaining.

So the Buffs drew up a “Hail Mary” play (this one called Rocket Left). Future NFL quarterback Kordell Stewart hiked the ball, dropped back in the pocket, raced around for a few seconds to let his receivers get to the end zone, and then launched the ball from about his own 27 to the goal line. The ball was tipped up and then caught, in the end zone, by Colorado receiver Michael Westbrook as time ran out.

Pandemonium ensued as the visiting Buffaloes stormed the field in celebration, in front of a stunned Michigan crowd.

4. Miami/Boston College 1984—Doug Flutie’s Heisman year of 1984 had many highlights. Maybe the biggest though came against the defending champion Hurricanes, in Miami.

Down 45–41 with six seconds left the 7-2 Eagles were at Miami’s 48-yard line in need of a miracle. Flutie delivered.

Under center, Flutie took the snap, eluded a strong pass rush just enough to unload a pass from about Boston College’s own 37-yard line all the way into the end zone, where receiver Gerard Phelan was—just behind Miami’s defense. Phelan held on for the winning score as Flutie was being lifted up in celebration by his own lineman.

3. Auburn/Alabama 2013—The setting for this game is still fresh in everyone’s mind, but we’ll replay it here.

Rivalry games are always big. But they get even bigger when national championships are on the line. This was the case earlier this season when 11-0, number-one ranked, two-time defending national champion Alabama traveled to 10-1 Auburn—their biggest rival. The winner would get a trip to the SEC title game and the loser, most likely, would be out of title contention.

Through three quarters the score was tied at 21 and looked to stay that way when Auburn pinned the Tide at their own one-yard line with 10:42 left. But a mistake in coverage led to a back-breaking 99-yard touchdown pass and a 28–21 Alabama lead. But after dodging a couple more bullets, Auburn eventually tied it at 28 on a 39-yard touchdown pass with 32 just ticks remaining.

Alabama got the ball back and drove to Auburn’s 38 with one (disputed) second remaining. But instead of going for a long pass to the end zone, Alabama head coach Nick Saban went for the 57-yard field goal. The kick fell short and Auburn’s Chris Davis caught it in the end zone and outran Alabama’s field goal unit 109 yards for the shocking game-winning score with no time left.

Little-known Boise State crashed the BCS party in 2006, to face off against the heavily-favored Sooners in the Fiesta Bowl on New Year’s Day 2007.

The Broncos surprised everyone by leading for most of the game until the wheels seemed to come off towards the end of regulation when Oklahoma turned a 28–20 deficit with 1:26 left, into a 35–28 lead, just 24 seconds later.

Boise State dodged a bullet by executing a perfect, yet very dangerous, hook-and-ladder on fourth-and-18 with 15 seconds left to tie the game and send it to overtime.

Oklahoma’s Adrian Peterson then led off overtime with a 25-yard scoring run to put the pressure on Boise State.

But the Broncos responded with what many thought would be a game-tying touchdown. Yet after scoring, Boise State did the unthinkable and went for two points and the win—and they got it. Quarterback Jared Zabransky ran the “Statue of Liberty” play, faking the pass and handing off to running back Ian Johnson, who ran it in past a confused Oklahoma defense for the 43–42 win.

1. California/Stanford 1982—Still the best after all these years, this incredible finish (known simply as “the play”) between two long-time rivals is still hard to believe.

Neither came into this game with championship hopes; Cal was 6-4, Stanford was 5-5. But the intensity was still there, as it was a rivalry game.

We’ll cut to the end right here. Stanford’s John Elway led the Cardinal to what was thought to be the game-winning drive as a field goal with just four ticks left put Stanford up 20–19.

All Stanford had to do was kick off and keep Cal from returning it for a touchdown.

The Cardinal squibbed the kick and the Golden Bears picked it up at their own 45-yard line and proceeded to lateral the ball five times to get through the Stanford defense—and band—to win the game.

That’s right. Making this play even more amazing was Stanford’s band on the field thinking the game was over when Cal freshman Dwight Garner (the third player to have the ball on the return) lateraled the balled right at the instant when his knee was about to touch the ground.

Three laterals later, Cal defensive back Kevin Moen barreled through a trombone player and into the end zone for the score (there’s a first time for everything) to set off a wild, confusing celebration.

Of course, the refs were confused as well. One signaled the play over, one threw a flag, and one picked up a flag all in a matter of seconds. Meanwhile it was November and the stadium had no lights making it that much more difficult for the players, coaches, referees, and band members to see.

Maybe the most memorable part of the play for the fans is the play-by-play call of excited Cal announcer Joe Starkey who nearly lost his voice screaming the crazy events to a stunned audience.