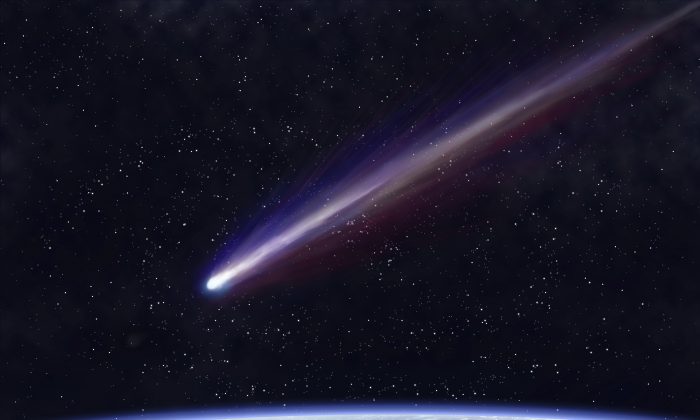 Great Balls of Fire: The Truth About Scotland’s Mysterious Flash of Light

On Monday, Feb. 29, around 18:45, many lucky people in Scotland and the north of England witnessed something spectacular. A bright light streamed across the sky, flashing several times before fading away. You could see it as far north as Shetland and Orkney, and as far south as Newcastle. Many people posted their camera recordings online, allowing millions to see it around the world.

Was it a UFO? Was it a piece of high-tech military technology? No and no. This was a rock from space colliding with the Earth’s atmosphere. The solar system is full of this kind of debris: bits of rock and ice left over from the formation of the planets some five billion years ago, or chipped off asteroids during more recent collisions in space. The Earth encounters and sweeps up this debris all the time.

Most common are the small specks up to the size of a grain of sand that produce brief flashes of light—a shooting star or meteor—when they encounter the Earth’s atmosphere and burn up. If you stand outside and watch the sky on a clear dark night, you should be able to spot several of these every hour. If you’re really lucky you might see a meteor shower, when the Earth is moving through the path of a comet that has left a trail of dust and rock behind after its icy material has been evaporated away by the sun’s heat.

When larger pieces of space debris such as the Scottish one stray into the Earth’s atmosphere, they produce more spectacular meteors as they burn up. These are known as fireballs or “bolides.” Judging from the footage online, Scotland witnessed one of about 10cm in diameter. It will have been moving at roughly 30km/second, burning up from the friction with the air as it plunged through. Some of the recordings show it breaking into dozens of smaller pieces before finally fading away. Sometimes this can produce meteorites—bits of rock that manage to survive their fiery descent and hit the ground—but apparently not in this case.

After the meteor flash, some people heard a bang or rumbling sounds. That would have been a sonic boom, like that produced by a plane that breaks the sound barrier. One report on the web says the sound was heard 90 seconds after the flash. If so, the meteor was 18 miles away, since sound travels about one mile every five seconds in air. Just like with the thunder after a lightning strike, you can estimate the distance of these things by counting the seconds of the interval and dividing by five.

This spectacular show was a special treat, only occurring a few times a year anywhere on the planet. In my whole life I’ve seen just one that was brighter, about 30 years ago in California’s Mohave Desert, where I had traveled to photograph a comet. I remember bending down to pick something off the ground when everything lit up in daylight colors. I was stunned for a few seconds before turning around to see the remaining pieces of that fireball streaming across the sky.

The meteor over Scotland was a brief and beautiful sight, fortunately not dangerous, but much larger space rocks can be devastating. On February 15 2013 a meteor with a diameter of 20 meters was recorded crossing the sky in Chelyabinsk, central Russia. The explosion and shockwave was serious enough to blast windows out of buildings. Many people were seriously injured, cut by flying glass (if ever you see an unexpected bright flash outside your window, move away from the glass just in case).

An event like this may occur every few decades. The largest impact in recorded history, the Tunguska event of 1908, flattened forests in Siberia for 100 miles. Even larger impacts can bring global catastrophe. Some 60 million years ago, in what is now the Yucatan peninsula in Mexico, an impact made a crater 100 miles across. It launched huge tsunamis, covered the entire planet with debris, darkened the skies enough to change the climate for years, and is thought to have caused or hastened the extinction of the dinosaurs (except for those that survive as birds).

Astronomers are now searching the skies for faint moving objects that cross the Earth’s orbit and could in future cause a regional or global catastrophe. If we can spot these far enough in advance, we may be able to intercept the object with a space probe to nudge its orbit enough to make it miss the Earth. Which would be for the best.

Keith Horne is a professor of astronomy at the University of St. Andrews in the U.K. This article was originally published on The Conversation.