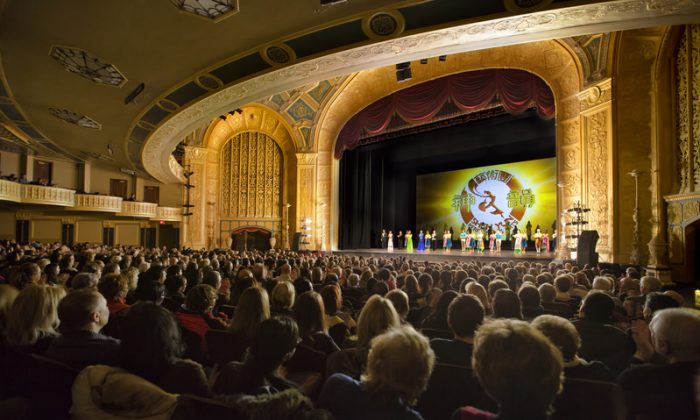 The theater-loving metropolises of Detroit and Grand Rapids are ushering out the old and bringing in the New Year with the wonders of ancient Chinese culture through Shen Yun Performing Arts.

Shen Yun returns, with an all-new production, first to Grand Rapids’ De Vos Performance Hall on Dec. 29 and 30. Then, from Jan. 1 through 3, this world-class classical Chinese dance company will be in Detroit performing at the Detroit Opera House.

Both Detroit and Grand Rapids have impressive and thriving theater districts, which draw on the benefits that performing arts offer to their communities. These benefits start with the pleasure of experiencing art in person and social engagement of individuals, families, and friends.

“Through the universal language of music and dance, Shen Yun weaves a wondrous tapestry of heavenly realms, ancient legends, and modern heroic tales, taking … a journey through 5,000 years of Chinese culture,” states the Shen Yun website. It comes alive by the unique story-telling abilities of classical Chinese dance, and by an orchestra bringing the spirit of Chinese music together with the power of a Western orchestra. By all audience accounts the dancing, music, and handmade costumes are “Beautiful” with a capital “B.”

Historically, most cultures looked to the heavens for inspiration in the arts, states the Shen Yun website. “Art was meant to uplift, bringing joy to both the people who created and experienced it. It is this principle that drives Shen Yun performers and their art,” said the Shen Yun website.

Shen Yun began, in 2006, “when a group of leading classical Chinese artists came together in New York with one wish: to revive the true, divinely inspired culture of China and share it with the world,” states the Shen Yun website. A culture almost completely destroyed by the atheistic Chinese Communist Party’s regime.

This year marks Shen Yun’s 10-year anniversary with the 2016 global tour beginning in Houston, Texas on Dec. 22. The season concludes in May after performing in more than 100 cities in 19 countries.

Many audience members have said in previous years right after seeing the show that they cannot wait for the next session. For Fresno, California, a third show was added as it with almost a fully packed theater a month ahead of its debut on Jan. 16-17.

Shen Yun’s understanding of art, its passion for the classical arts, and mission to revive a divinely inspired culture are what makes it unique and what audiences talk about.

A glimpse of what Shen Yun may bring to theater-goers in Michigan is reflected by headlines of Houston audiences‘ reviews, “Houston Business Owner Says Shen Yun Is Pure Love” and “Shen Yun Creates Nostalgic World for Houston Audience,” the first to see this season’s performances.