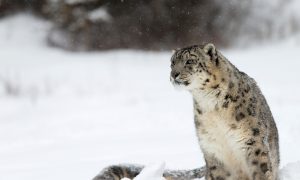 How to Track, Capture, and Tag a Snow Leopard (Photos)
0
GPS Tracking to help Study Snow Leopards in India
Environment

TRACKING: Satellite-linked collars will be soon fitted on six snow leopards in the tribal Spiti valley of Himachal Pradesh to get a deeper understanding of the behaviour of the endangered cat.The $40,450 project (Rs 25 lakh) will benefit the state wildlife department in studying the movement of the snow leopards in the Himalayas where their habitats are being affected by climate change and human settlements.

“Half a dozen snow leopards will be tagged by GPS collars and the behaviour of these elusive cats will be observed,” said Vivek Mohan, a senior state wildlife department official.

Snow leopard (Panthera uncia) has been categorised as an Endangered Species by the International Union for Conservation of Nature (IUCN). Their population has been steadily decreasing over the last 2 generations.

The Snow leopard, a very beautiful yet shy and elusive big cat is found in about 12 countries around the world including India, China and Pakistan. In India it is found in higher reaches of the snow-capped Himalayas, above the tree line, in the states of Jammu and Kashmir, Himachal Pradesh, Uttarakhand, Sikkim and Arunachal Pradesh. According to the conservationist group WWF, India is home to about 700 of the world’s 7000 snow leopards.

But this wild cat is difficult to document, owing to its high elevation habitat and elusive nature. The actual status of the snow leopard and the range occupied by it are poorly mapped. Therefore the GPS tagging of the snow leopard will be highly beneficial.

In recent times, the Snow Leopard has faced many challenges because of the rapidly depleting habitats resulting in the absence of prey for this top predator. It has led the wild cat to venture closer to human habitation and prey on livestock grazing in the region. Although it does not pose a physical threat to humans, it is sometimes killed as retribution for having preyed on livestock. It is also illegally killed for its beautiful furry spotted coat. Snow leopard bones and body parts are sought by smugglers who sell them for use in traditional Chinese medicine.

There are also plans to set up a research centre in the state along the Tibetan border in Spiti Valley, which is an important habitat for the snow leopard.

According to estimates there are less than 30 snow leopards left in Himachal Pradesh.

Know More About the Snow Leopard

This article was originally posted at www.indiasendangered.com by Ramya Naresh, a contributing writer