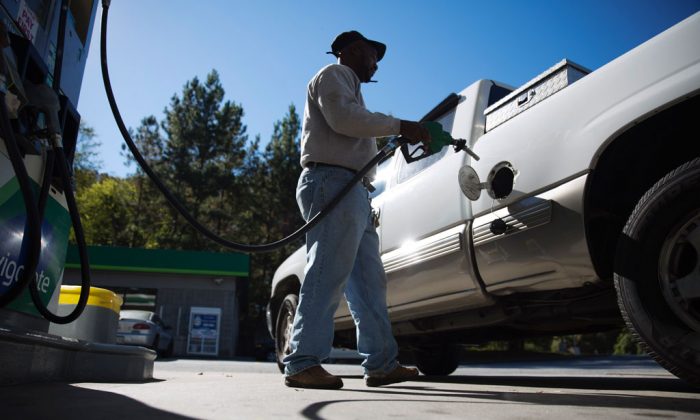 Motorist Jerry Reed fills up his tank at a gas station in Atlanta on Oct. 30, 2014. Almost unbelievably, the national average price of a gallon of gasoline is back under $3 for the first time since Dec. 2010. (AP Photo/David Goldman)
Business & Markets

Gov’t Tells US Drivers to Get Used to Cheap Gas

In a dramatic shift from previous forecasts, the Energy Department predicted Wednesday that the average price of gasoline in the U.S. will be $2.94 a gallon in 2015. That is a 44-cent drop from an outlook issued just a month ago.

If the sharply lower estimate holds true, U.S. consumers will save $61 billion on gas compared with this year.

Rising oil production, particularly in the U.S., and weak spots in the global economy have led to a sharp reduction in oil prices over the past four months. Not seeing much of a change ahead, the government cut its forecast for global oil prices next year by $18 a barrel to $83.

As a result, U.S. drivers will pay on average 45 cents less for a gallon of gas next year compared to this year. Based on expected gasoline consumption, that’s a savings of $60.9 billion.

That may not seem like a lot in the context of a $17.5 trillion U.S. economy, but economists say it matters because it immediately gives consumers more money to spend on other things. Consumer spending accounts for 70 percent of the U.S. economy.

“It would be a reversal of the trend over the last few years where consumers can’t stretch a dollar far enough,” says Tim Quinlan, an economist at Wells Fargo.

Quinlan says the price of gasoline is one of the three big drivers of consumer confidence, along with stock prices and the unemployment rate. “Lately all three are moving in the right direction,” he says.

After falling for 49 straight days, the average gasoline price in the U.S. Thursday is $2.92, the lowest since December of 2010, according to AAA. That was also the last full year when the average came in below $3 a gallon.

While it’s not unusual for gas to hit its low for the year in late fall, the government is now saying that these prices aren’t just a low point, but instead will be the norm next year.

Adam Sieminski, administrator of the Energy Information Administration, the Energy Department’s statistical arm, attributed the lower pump prices to lower prices for crude oil and weak fuel demand. The EIA did hedge its bet on lower oil prices though, as it cautioned that OPEC could cut production in order to push prices higher.

Oil production around the world has been strong in recent years. A boom in the U.S. has pushed domestic production up 70 percent since 2008. At the same time, demand for fuels is growing more slowly than expected in Asia and Europe because of weak economic growth.

The EIA also slightly lowered its prediction for growth in U.S. oil production because lower prices will force some drillers to cut back. Production is expected to reach 9.4 million barrels a day in 2015, down from a previous estimate of 9.5 million barrels per day. Still, that would be an increase of 4 percent over this year and the highest domestic crude production since 1972.