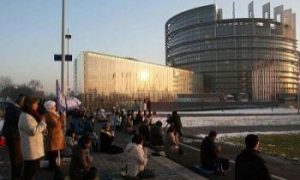 By Angela Wang
Print
NEW YORK—Family members of immigrants facing deportation, city officials, and immigrant advocacy groups on Monday urged Gov. Andrew Cuomo to expand the Immigration Pardon Panel and the frequency of pardons for immigrants with past criminal records. The group gathered for a press conference at D'Agostino Hall of New York University Law School.

Almost exactly 15 years ago, the federal government enacted a series of immigration laws that expanded the range of offenses for which immigrants can be deported, reduced avenues for relief, and eliminated the judge’s discretion in deciding whether or not to deport an individual based on an immigrant’s positive qualities. As a consequence, the number of deportations has multiplied almost tenfold nationwide.

Last May, half a year before his term ended, former Gov. David Paterson convened a panel of five members to review cases of immigrants facing deportation resulting from past convictions in the state. His initiative attracted more than 1,000 applications, with 33 getting approval by the end of last year.

One of the guests that spoke at the press conference was Tam Phan, a Vietnamese immigrant who came to the United States with his parents as a child. At age 17, Phan was sentenced to jail for robbery and burglary. His parents became naturalized U.S. citizens during the 17 years he spent in jail. After being released last year, Phan now faces deportation back to Vietnam and is barred from any forms of relief.

“I am only half a member of society, and I want to be more than that,” said Phan in his speech. “My grandmother just broke her hip. But I can’t go to visit her, because once I leave this country, I won’t be able to return.”

If Phan’s case is pardoned, he will be able to have his order of deportation removed and apply for permanent residency, citizenship, and documents to travel abroad.

“The current system criminalizes and unfairly punishes immigrants. Governor Cuomo has an amazing opportunity to take leadership for human and civil rights,” said Mizue Aizeki, lead community organizer at the Northern Manhattan Coalition for Immigrant Rights. Aizeki also pointed out that the current members of the panel lack experience in working with immigrants that would allow them to have a better understanding of the individual and their families’ suffering. She urges Gov. Cuomo to take action and give these immigrants “an opportunity for justice.”

“Such discretion could be the difference between New York families remaining together or being torn apart by deportation,” said Aizeki.