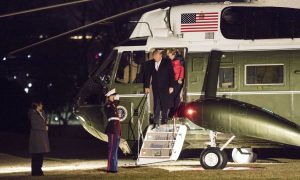 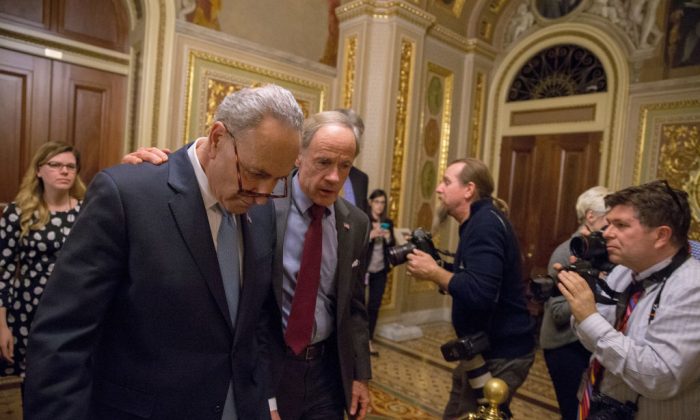 Senate Minority Leader Chuck Schumer (D-NY) and Senator Tom Carper (D-DE) walk out of a Democratic caucus meeting at the U.S. Capitol in Washington on Jan. 19, 2018. A continuing resolution to fund the government has passed the House of Representatives but failed in the Senate. (Tasos Katopodis/Getty Images)
Politics

Government Shuts Down as Senate Fails to Reach a Deal

WASHINGTON—Hours before the deadline, Senate Democrats blocked the passage of a short-term funding bill, leading to a government shutdown.

President Donald Trump and the Senate’s top Democrat leader on Friday failed to reach an agreement on the spending bill. As a last-ditch effort to keep the government open, the Senate scheduled a vote for 10 p.m. on the House-passed bill to extend funding for four weeks. However, Democrats blocked passage of a funding patch known as a continuing resolution (CR) that would maintain current funding for federal operations and keep the government open through mid-February.

As nearly all Democrats and some Republicans opposed the measure, the government shut down at midnight.

“Not looking good for our great Military or Safety & Security on the very dangerous Southern Border,” Trump wrote on Twitter before the Senate vote. “Dems want a Shutdown in order to help diminish the great success of the Tax Cuts, and what they are doing for our booming economy.”

The House of Representatives passed a short-term funding bill late Thursday on a mostly party-line vote of 230-197. The bill also covered six-year funding of the Children’s Health Insurance Program (CHIP).

The stopgap bill was sent to the Senate, where it faced stiff opposition from Democrats. The Senate needed 60 votes to pass the measure.

“The reality is that this is not about policy, it’s about politics,” White House Director of Legislative Affairs Marc Short said at an emergency press conference on Friday.

“We’re not familiar with anything in this CR that Democrats are opposing,” he said.

Trump on Friday morning canceled his planned weekend trip to Mar-a-Lago to reach a deal with Senate Democrats. He had been scheduled to leave on Friday afternoon.

Not looking good for our great Military or Safety & Security on the very dangerous Southern Border. Dems want a Shutdown in order to help diminish the great success of the Tax Cuts, and what they are doing for our booming economy.

Both parties failed to reach an agreement on a broad budget for the last few months, and three stopgap measures have been passed so far. Lawmakers are struggling to reach a deal on immigration and spending levels.

As a precondition for supporting a budget deal, Democrats have pushed for a legislative solution for Deferred Action for Childhood Arrivals (DACA) recipients. And DACA is the major sticking point in the negotiations, according to Mick Mulvaney, Director of the Office of Management and Budget.

“There’s no DACA bill to vote on and there’s no emergency in terms of the timing on DACA,” said Mulvaney during the press conference at the White House. “DACA does not expire until March 5th.  So there’s absolutely no reason to tie these two things together right now,” he said.

DACA was introduced through an executive order by President Barack Obama in 2012 as a temporary measure that gave recipients renewable, two-year work authorization and deportation immunity. It involved nearly 800,000 individuals—referred to as Dreamers—who were illegally brought into the country as children.

In preparation for a potential government shutdown, Mulvaney sent out a memo to the heads of federal departments and agencies Friday afternoon. He advised them to review their plans for operations in the absence of appropriations in the event that a shutdown begins at midnight.