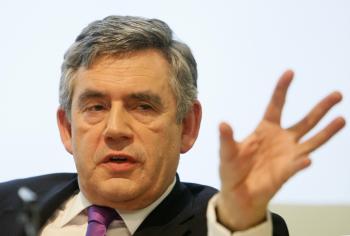 Brown’s Election Strategy: From Class War to War on Class

Simon Veazey
Freelance Reporter
Simon Veazey is a UK-based journalist who has reported for The Epoch Times since 2006 on various beats, from in-depth coverage of British and European politics to web-based writing on breaking news.
View profile
Follow
biggersmaller
Print
In a key speech, Gordon Brown has sought to turn the battle lines for the upcoming British election around. Earlier saber rattling about an election "class war" has been firmly ditched in favor of a war on class itself.

The Labor Party had previously begun to dig trenches along class lines, painting the opposition party as upper-class "Tory toffs" in top hats, mocking their leader’s education in the country’s most exclusive private school, echoing back to the working-class socialist roots of the Labor Party.

When this gained a little traction, alarmed the middle-classes, and led to accusations of outmoded class mentalities, it appeared that the tactic was dropped for the new year.

Prime Minister Brown clearly shifted tack in a speech on Dec. 16, 2009, saying that the defining mission of the Party should be to break through class divisions.

With the general election now just a few months away, Brown set out to sell the Party to the middle classes, resuscitating the specter of Blair’s New Labor—the very brand he has shunned since inheriting the premiership from the unpopular Blair.

In a key speech during the weekend, Brown said, "I believe that the defining mission of New Labor in the coming decade should be nothing less than to unleash a wave of social mobility not seen in this country since the immediate aftermath of the Second World War."

Peppering his speech with references to New Labor and "aspiration"—a key pitch used by Blair—he said, "Social mobility will be our theme for the coming election and the coming parliamentary term."

With his explicit return to New Labor, once a dirty word in the Brown premiership, Brown’s frequent references to "middle Britain" were not only a pitch to the flexibly defined middle classes, but also to the political middle, the center ground that New Labor successfully occupied.

Polls over the last several months have shown David Cameron’s Conservative Party consistently over 10 points ahead of the ruling Labor Party.

Cameron became leader of the opposition party just ahead of Tony Blair’s departure, announcing himself as the “heir to Blair" and his party as the natural successor to New Labor.

With his education at Eton school, which has churned out many past prime ministers, and access to exclusive echelons of society, David Cameron’s background had proved too tempting a target for the Labor Party that sought to distance itself from Blair’s heritage.

Gordon Brown tried earlier this month to play down remarks made in the Houses of Parliament on Dec. 2 when he said David Cameron had dreamed up his tax policies "on the playing fields of Eton," a clear jibe at the opposition leader’s privileged upbringing.

New Labor was a reinvention of the Labor Party that shifted the Party to the center-left, enabling them to capture the middle-class votes in the 1997 election that had previously eluded them.

In an interview with The Daily Telegraph, business secretary Peter Mandelson appeared to also signal the Labor Party’s backing away from class war with a suggestion that the top rate of tax might be cut.