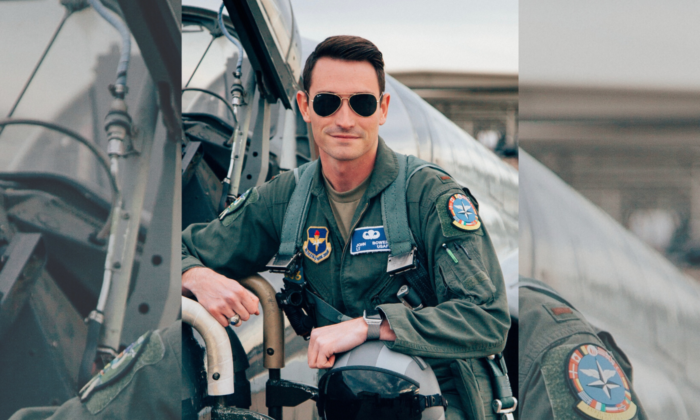 ‘God Has Called Me to Stand Up’: USAF Pilot Facing Discharge for Rejecting COVID Vaccine

USAF pilot Lt. John Bowes dreamt of flying and protecting the country his entire life—since he was a child.

He is heartbroken now that he had to put his religious faith over his dream due to the COVID vaccine mandates within the U.S. military, but believes that God is helping him get through the tribulation and that he has a duty to speak up.

The 24-year-old was an F-16 student pilot but was taken out of training and prevented from flying since September of last year when he first submitted his religious accommodation.

“I exercised my constitutional and statutory right to receive a religious accommodation. And then I was, as a direct consequence of doing that, removed from training to fly the F-16. I personally believe that is religious discrimination,” Bowes told The Epoch Times.

He made clear that his views are not representative of the USAF.

“Now that my religious accommodation is denied, I have been formally removed from training. I’ve received a letter of reprimand, which is a disciplinary action that goes on my record as an officer. And I’ve been told that I’ll be processed for discharge here pretty soon,” he said.

Bowes says that nine months ago he filed an equal opportunity complaint with the Air Force Equal Opportunity office, but has not heard back from them so far.

“I’m absolutely heartbroken,” Bowes said, “it’s sad to see that my dream is at risk over something like the COVID vaccine, which doesn’t stop you from getting or spreading COVID.”

The Epoch Times reached out to the USAF for comment.

COVID vaccines, which were marketed as preventing infection from the Chinese Communist Party virus, are now known to provide little protection against infection after the Omicron virus variant became dominant, with vaccine booster efficacy waning over time.

“My faith is what gets me through it because I know that God has called me to speak up about these mandates, and God has called me to stand up for the beliefs that I have—that he gave me, and I’m risking my dream and my career and my future and my financial stability, and my honor as an officer, which is being tainted by these disciplinary actions. All because of my oath to my faith, my oath to God which got me here in the first place, as well as my oath to the Constitution of the United States, which all officers take,” Bowes said.

“And so I’m not here to be rebellious. I’m not here to stick it to the man and so many service members aren’t here to do that, either. We’re simply doing what we swore to do. And standing up for our religious beliefs.”

However, the Army’s vaccination rate could be far lower than 96 percent, an anonymous active-duty senior Army official told The Defender.

As a Catholic, Bowes believes in the sanctity of human life and doesn’t want to use the COVID vaccines because aborted fetal cell lines are involved in either the production or the testing of these.

“That action, the use of that vaccine is not in line with my belief that all human life is sacred and ordained by God to exist on this earth. And the use of abortion, in order to accomplish the production of these vaccines, is just morally abhorrent to me,” Bowes said.

Disclosed CDC emails show that they have been producing and culturing human stem cell lines.

Bowes added that he knows “a lot of service members” whose primary argument in their religious accommodations is the sanctity of their genetic material and not wanting to be forced into having it altered.

Recent studies have found that the mRNA in vaccines can become embedded in DNA, and the Pfizer vaccine’s mRNA is even able to enter human liver cells and be converted into DNA.

According to official data from the Air Force, over 9,500 religious accommodations requests had been denied approval as of June 14.

This is despite Archbishop for the Military Service Timothy Broglio saying in October 2021 that: “The denial of religious accommodations, or punitive or adverse personnel actions taken against those who raise earnest, conscience-based objections, would be contrary to federal law and morally reprehensible.”

Bowes personally knows a few pilots who “developed myocarditis from the vaccine, and they don’t fly anymore.”

The Air Force has been struggling with pilot shortages for years now.

Former Air Force Chief of Staff General David Goldfein testified before congress in 2017 about a shortage of aviators, writing in 2016 that the situation was a “quiet crisis.”

“I know of personally more than 700 pilots who are actively unvaccinated and have filed a religious accommodation or have filed for a medical exemption or something of the sort,” Bowes said.

A letter from November 2021 (pdf) from DoD pilots submitting religious accommodation for vaccination to the House and Senate Armed Services Committees details the impacts based on an analysis of a group of 357 pilots that did not want to take the COVID vaccines.

Their estimated value was totaled at $7.8 billion tax dollars, 4,842 years of cumulative service, and 14 years of service on average.

Nineteen percent of them support the mission of nuclear deterrence, 69 percent are instructors, and nine percent are Air Force Weapons Instructors or Navy TOPGUN graduates.

“The implications of 700 pilots is pretty extreme,” Bowes said in an interview with LifeSite news.

Recently, an American Airlines pilot suffered a cardiac arrest between flights after mandatory COVID vaccination, and a law group started suing all major airlines over the vaccine mandates.

Attorneys and doctors have also charged that the FAA is violating its own rule that pilots should not fly after having taken medications that have been approved for less than a year.

An advocacy group called Freedom Flyers is assisting pilots to come forward and speak out about their conditions.

A spokesperson for the USAF explained the religious accommodation process for the COVID vaccine in the military branch in an email statement:

“Airmen or Guardians seeking an immunization exemption are required to submit their request to their MAJCOM or Field Command commander, after counseling with their unit commander and a military medical provider. For a religious accommodation, in addition to counseling with the unit commander and medical provider a military chaplain interviews the requester. Exemption requests are evaluated on their own merit and the decision authority must consider the compelling government interest in mission accomplishment, which includes military readiness, unit cohesion and the health and safety of both the member and the unit. Once a decision is made by the MAJCOM or Field Command commander, the service member is notified of the decision. Appeals go to the DAF Surgeon General. The member does not have to get an immunization as long as the request is still in the process of being decided,” the statement reads.

“Members who receive a denial of the accommodation request have 5 calendar days from the denial to 1) begin a COVID-19 vaccination regimen, 2) submit an appeal to the final appeal authority or 3) request to separate or retire. Members who continue refusing to obey a lawful order to receive the COVID-19 vaccine after their accommodation request has been denied or retirement/separation has not been approved will be subject to initiation of administrative discharge proceedings.”