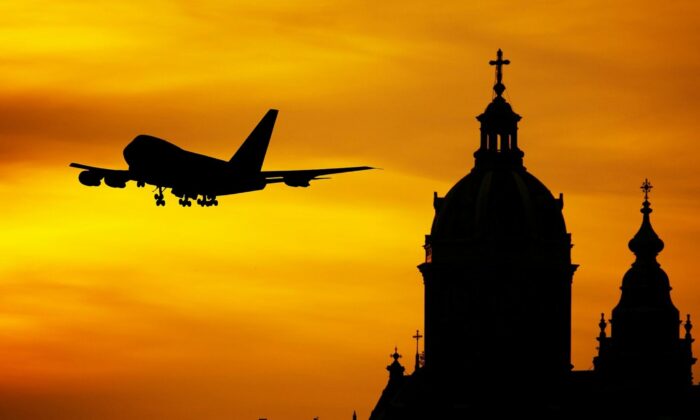 A stock photo of an airplane taking off. (Mohamed Hassan/Pixabay)
By Enrico Trigoso

Robert Snow, a pilot for American Airlines, one of the top 3 largest airlines in the country, has 31 years of commercial airline experience and additionally seven years of experience as a U.S. Air Force pilot.

Snow says that he might not be able to fly again after he suffered a cardiac arrest only 6 or 7 minutes after landing a plane he piloted from Denver to Dallas Fort Worth (DFW).

He still had two more flights scheduled on April 9.

He believes that his cardiac arrest is connected to the Johnson & Johnson COVID vaccine he was forced to take in order to keep his job on Nov. 4, 2021, even though he already had natural immunity from previously contracting the virus.

“There is no other explanation,” McCullough said about Snow’s case since Snow has no coronary disease.

“The MRI pattern is consistent,” the doctor said. “Indeed, it may have been vaccine-induced myocarditis with a late manifestation of cardiac death.”

In addition, he told The Epoch Times that he has received “several phone calls and communications from friends in the industry that do think that they might have had issues with a vaccine.”

Most alarming is that some pilots are “afraid to raise the flag and say, ‘Hey, I think I might have an issue because they’re afraid they’ll either lose their medical certification to fly, which if we lose our medical, we can no longer operate. We can’t be a commercial pilot anymore. And in worst-case scenario, which is what right now probably what I’m experiencing is you can’t fly at all. Period,” Snow said.

“I would just tell you that there are other pilots out there that have had concerns, not just pilots, also because it was an employee mandate. So we have flight attendants, we have mechanics, we have dispatchers, we have gate agents, you name it. Of course, for pilots, we consider that a safety-sensitive job so we’re a little bit more concerned from the standpoint of aviation safety; but yes, I have received calls from other pilots and other communications stating that they have concerns but because of the nature of this, they’re afraid to come forward.”

The veteran pilot had serious questions about the novel COVID vaccines that are supposed to prevent infection from the Chinese Communist Party virus, but are now known to provide little protection against infection after the Omicron virus variant became dominant.

He did not want to get the shot, but being the sole provider for his family, decided to take the risk.

Amid short sighs, Snow told The Epoch Times: “Initially, my employer was not going to force the vaccine on its employees. They subsequently changed their mind on approximately October 1, in conjunction with the executive office here in the United States mandate on federal contractors. They decided that now that they would enforce the vaccine mandate on all employees of the airline. And in regard to that, we were told that if we did not receive the vaccination we would be terminated. There was no question as to the sincerity at that time of their statement.”

Airlines, which are government contractors, were affected by President Joe Biden’s executive order from September that states all employees of those companies have to be vaccinated against the CCP virus.

The Epoch Times reported on December last year that the FAA (Federal Aviation Administration) was breaking its own rule that states pilots should not fly after having taken medications that have been approved for less than a year, according to a group of attorneys, doctors, and other experts; including another pilot who says his career ended due to adverse reactions from a vaccine.

“So I elected, after some serious consideration given that I was the sole source of income for my family, that I would go ahead and receive the vaccine. I didn’t want to,” Snow said.

“I had serious questions as to the safety and the efficiency and the effectiveness of the vaccine. I’d already had COVID. I’d already tested positive for antibodies, and really didn’t see the rationale for it. But, the only solution that might have been available to me to not receive the vaccine was to request a religious or medical exemption. Neither of which did I really feel like I should request. Medical exemption, I didn’t have any reason to not to, scientifically speaking, not receive it, other than the fact that it was issued under an EUA and not fully tested. And as far as a religious exemption, I didn’t see any reason to request that because I don’t really have a religious belief that would prevent me from receiving this particular vaccination. So for moral and ethical reasons, absolutely. But that wasn’t considered a valid reason not to get the vaccine.”

The veteran pilot had a sore arm for 10 days after getting the jab, and later experienced a strange pain that spread through his upper body.

Snow said that his arm became “pretty sore,” for 10 days, something which he didn’t experience with any previous vaccinations. For other vaccines for travel or in the military, he would usually have soreness for two or three days maximum.

Things returned to normal until January, then he recalled:

“I was on that course of a flight and noticed a strange pain while I was working on the overhead panel. …  I got a strange pain in my right shoulder, seemed to spread down to my lower right quadrant and then up into my chest and through my shoulder blades, which I thought was very strange, but I just kind of chalked it up to manipulating myself oddly on the overhead panel, maybe tweaked a nerve or something like that, because I really had no history of that whatsoever that I’d ever experienced. And so [the] pain went away after one or two minutes and then back to normal.

“When we finished that flight, I actually tested positive again for COVID for the second time, [the] first time I had it was in March of 2021. Second time then would have been in January of 2022—this is postvaccination mind you— and that was what I presumed to be the Omicron variant because it presented itself basically as just allergies, I kept sneezing a lot, runny nose and that was it, no fever, no chills, no nothing, no loss of taste and smell like I had the first time. So I went back to work, after the mandatory amount of time, and I started getting the pain again, only a little bit more frequently this time. So actually, with a history of gastrointestinal issues, I went to see a gastroenterologist he elected to do an endoscopy to take a look to see if I had maybe a hiatal hernia or something that was aggravating the vagus nerve. We also did an abdominal CAT scan.

“During the course of awaiting the results of the abdominal CAT scan, that’s when I had my sudden cardiac arrest and that was after the course of a flight from Denver to DFW. We had been on the gate just a few minutes after shutting the aircraft down, probably about six minutes, six, seven minutes after touchdown. And I stood up to collect my bags to proceed to the next aircraft. We were to finish up with another turn to a different city to come back and then finish the trip on day four. And that’s the last I remember, standing up collecting my luggage. And at that point, witnesses say I collapsed in the flight deck. And that’s all I know at this point. When I woke up, I was in the ICU at Baylor Scott and White in Grapevine Texas, having suffered a sudden cardiac arrest.”

He now has to wear an automatic external defibrillator or “life vest” that monitors his heartbeats, except when he showers when he is supposed to be monitored by a family member. The life vest is designed so that if the heart rhythm becomes abnormal, it will send a small shock to get it back to sinus rhythm, and if it detects full atrial fibrillation, ventricular fibrillation, or any sort of fibrillation, it would send a much stronger shock to try to get it back to the right rhythm.

Albeit all this trauma, Snow feels very fortunate because he was able to get professional care immediately, which is not the case for many other people.

According to heart.org: “Cardiac arrest is when the heart stops beating. Some 350,000 cases occur each year outside of a hospital, and the survival rate is less than 12 percent. CPR can double or triple the chances of survival.”

“If you look at the numbers … I try not to look too closely at them because it’s rather intimidating.” Snow said, referring to the survival rate of cardiac arrests.

“The thing that concerns me, is [that] this happened in the right place at the right time. Because if it had happened … any other time where I was either alone or beyond reasonable response time for a medical response, I wouldn’t be here having this conversation.”

John Pierce Law, who previously represented many prominent conservatives, is going to sue 18 major airlines, including American Airlines, focusing on the alleged unconstitutionality of the vaccine mandates that were imposed on the airline employees.