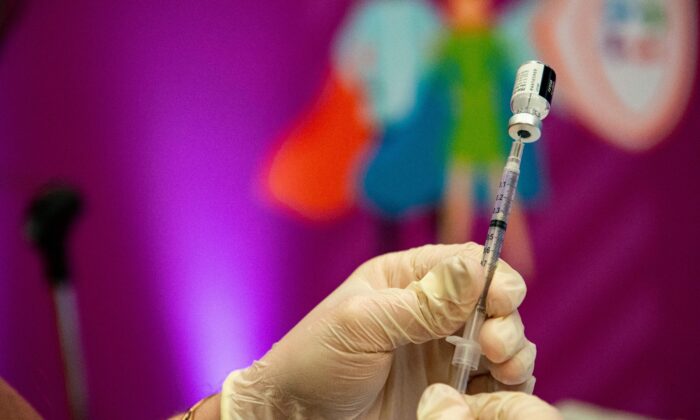 COVID-19 vaccine boosters bolster protection against hospitalization but the effect wanes over time, according to a study published Feb. 11.

Researchers with the Centers for Disease Control and Prevention (CDC) and other institutions found the booster effectiveness against emergency department or urgent care (ED/UC) visits held at 87 percent during the first two months after a third dose of the Pfizer or Moderna vaccine, but dropped to 66 percent between four and five months after receipt of the booster.

“The finding that protection conferred by mRNA vaccines waned in the months after receipt of a third vaccine dose reinforces the importance of further consideration of additional doses to sustain or improve protection against COVID-19–associated ED/UC encounters and COVID-19 hospitalizations,” the researchers wrote in the study, which was published by the CDC’s quasi journal.

The Moderna and Pfizer vaccines are both built on messenger RNA (mRNA) technology.

Both were authorized by U.S. regulators in December 2020 and both are administered in two-dose primary regimens spaced several weeks apart.

But the vaccines proved less effective against both infection and hospitalization after the Delta virus variant became dominant in the United States, and have been even less effective against the Omicron variant, which displaced Delta in December 2021. That’s led U.S. health authorities, including the CDC, to recommend three doses of the Pfizer and Moderna jabs, and some officials have hinted that a second booster will be recommended in the future.

Researchers conducting the new study analyzed COVID-19 patients who sought medical care between Aug. 26, 2021, and Jan. 22, 2022. They pulled data from the VISION Network, a surveillance system managed by the CDC.

The increases in protection for boosters, even with the waning, show the importance of being “up to date with recommended COVID-19 vaccinations,” the researchers said.

Before being boosted, protection from vaccination against ED/UC visits due to COVID-19 was 69 percent within 2 months of the second shot, but dropped to just 37 percent at 5-plus months after the second shot, researchers found.

Additionally, the primary regimens of the Moderna or Pfizer shots were 71 percent effective within 2 months of the second dose and dropped to just 54 percent after 5-plus months.

Limitations of the study include not examining the vaccine effectiveness against COVID-19 infections that did not lead people to seek medical care.

The other study published by the CDC Friday found that reports of adverse reactions to booster shots were less frequent than reports that followed the second doses of the mRNA-based vaccines. That included reports of myocarditis, a form of heart inflammation that has been identified as occurring in higher-than-expected rates among youth, particularly young men, following vaccination with the Moderna or Pfizer jabs.

The studies were published by Morbidity and Mortality Weekly Report (pdf). The quasi-journal only publishes papers after the CDC director or other top CDC officials review them and the published papers always reflect or are consistent with CDC policy.