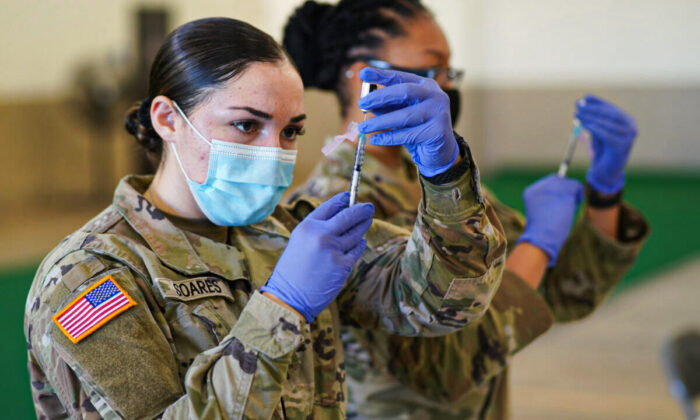 The FAA (Federal Aviation Administration) is breaking its own rule that states pilots should not fly after having taken medications that have been approved for less than a year, according to a group of attorneys, doctors, and other experts; including a pilot who says his career ended due to adverse reactions from a vaccine.

Airlines, which are government contractors, are affected by President Joe Biden’s order from September that states all employees of those companies have to be vaccinated against the CCP virus.

The group of attorneys and doctors wrote a letter directed at the FAA, the Department of Transportation, the Department of Justice, as well as several airlines, demanding that they medically flag all vaccinated pilots and have them re-examined for blood clotting problems as well as their cardiac health.

“The Federal Aviation Agency is charged with ensuring the safety of the flying public. Instead, as we speak the FAA, as well as the commercial airline companies, are acting in contravention of their own federal aviation regulations and associated guidance which tells medical examiners to NOT issue medical certifications to pilots using non-FDA approved products,” human rights attorney and primary author of the letter, Leigh Dundas, told The Epoch Times via email.

“The title of the section I’m talking about literally says ‘Do Not Issue—Do Not Fly’ and then instructs medical examiners to ‘not issue’ medical certifications to pilots using products that the FDA ‘approved less than 12 months ago.’ … The pilots are flying with products which are not even recently approved—in violation of the above wording—they are flying with injections in their bodies which were NEVER approved by the FDA at all (as no COVID vaccine which is commercially available in the U.S. has received FDA approval),” Dundas said.

Amid widespread confusion about the availability of the FDA-approved Pfizer vaccine, The Epoch Times did an investigation in October and discovered that the approved Comirnaty version of the vaccine was still not commercially available in the United States. Pfizer says it’s the same vaccine that originally received emergency use authorization.

Another one of the signers is Cody Flint, whose career ended after voluntarily taking the jab and experiencing adverse effects. He was told by an FAA medical examiner that his injuries were so severe that he would be denied for renewal of his pilot’s license. He is a father of two with no underlying conditions.

The 34-year-old agricultural pilot doesn’t remember how he landed after nearly blacking out in mid-flight.

He was flying his aircraft when tunnel vision started to kick in and a headache he had developed after getting the jab worsened.

About two hours after having taken off, he decided to pull up the plane to go back and felt an “extreme burst of pressure” in his ears, then immediately “nearly blacked out, [and felt] dizzy, disoriented, nauseous, and [was] shaking uncontrollably,” Flint told The Epoch Times.

As a commercial pilot, Flint was concerned when he first saw FAA’s 48-hour no-fly rule after a COVID-19 vaccination.

The FAA has stated that pilots and air traffic controllers may receive the COVID-19 vaccine, with appropriate precautions.

“I find it hard to comprehend how the FAA justified moving the goalposts of safety from one full year of post-marketing safety review to only two days. The dangers associated with a pilot experiencing a severe adverse reaction from an mRNA-type Covid vaccine while at the controls of an airplane can be horrifying and deadly to say the least.

“As a pilot that experienced a tragic and career-ending adverse reaction to the Pfizer COVID vaccine while actively flying an airplane, I feel I can honestly and creditably speak out about the dangers associated with pilots returning to flight duties too early following COVID mRNA type vaccination,” he added.

Another signer, Dr. Pete Constantine Chambers, D.O. has been practicing medicine for 25 years, 16 of which he served as a Flight Surgeon attached to Special Operations.

“Unfortunately, several of my soldiers have experienced hospitalizations for serious diagnoses to include brain hemorrhages, myocarditis, anaphylaxis, pulmonary emboli, and vertigo. These were all post-vaccination. Army Regulations state we should be tracking these cases post-immunization. Other concerns stem from the recent rash of suicides amongst soldiers serving on the mission. The added deployment stressors placed upon the young heroes paired with the unknowns of experimental medications concerns me,” Chambers told The Epoch Times.

He made clear that his opinions are personal and don’t reflect those of the State Military Department, the Medical Command, or the Department of Defense.

“I had warned the medical command and leaders to pay strict attention to these stressors as I was conducting an initial study early in the deployment. My study was cut short when I was ordered to focus only on convincing soldiers to take the vaccine and not to administer informed consents,” Chambers added.

“I also believe as a provider in the first stanza of the Hippocratic Oath; ‘First of all, do no harm.'”

Upon The Epoch Times’ request for comment to the FAA about the potential violation of the 12-month regulation, the agency referred to an FAQ page on its website.

“The Federal Air Surgeon determined that FAA medical certificate holders may not act as pilot in command, or in any other capacity as a required flightcrew member, for 48 hours after each dose of the Pfizer-BioNTech, Moderna, and Johnson & Johnson vaccines. The Federal Air Surgeon made this determination after evaluation of available medical information about these COVID-19 vaccines and potential side effects. As a result of this determination and consistent with 14 CFR § 61.53(a), each person subject to part 67 who receives the vaccine must wait 48 hours after each dose before acting as pilot in command or as a required flightcrew member,” it states.

The Epoch Times reached out to the U.S. Army and Pfizer for comment.