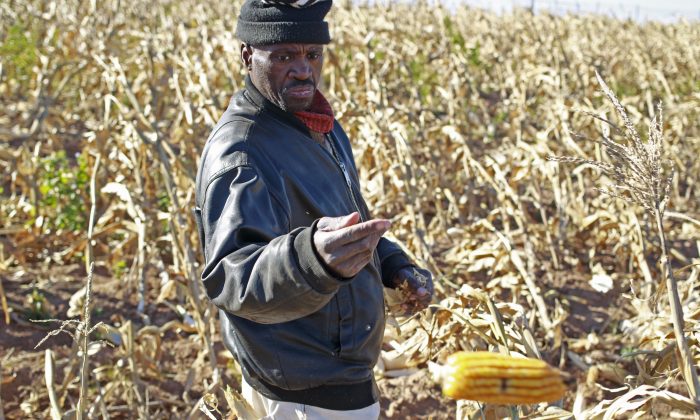 A farmer picks maize in a field near the house and birth place of former South African President Nelson Mandela in Qunu, South Africa, Wednesday, June 12, 2013. Much of the maize in the country is now genetically modified. (AP Photo/Schalk van Zuydam)
Africa

GMOs in South Africa: Facts at a Glance

-Are genetically modified organisms [GMOs] allowed in the country? Are they grown?

-When did they start being grown? What types of GMO crops are grown?

Under the Genetically Modified Organisms Act of 1997, companies selling such crops were permitted to go through an application process to have crops approved. The first was cotton and maize from biotech company Monsanto in 1997 (insect resistant), followed by other types of cotton and maize in 2000 and 2002 (herbicide tolerant) and a soybean variety in 2001(herbicide tolerant).

Before that, import of biotechnology products was regulated starting in 1983 under the Agricultural Pests Act.

Most companies seeking GM crops are given permission to get them. Some have been denied. For example, a GM potato was rejected several years ago.

“Small-scale farmers, for whom this product was developed in the first place, seem more concerned about other problems, such as lack of water, poor access to land and rodents,” said Julian Jaftha, chairman of the executive council for Genetically Modified Organisms in South Africa, according to All Africa. “Based on these and other reasons, we have rejected the application.”

-Are they labeled in any way?

All goods containing genetically modified ingredients and components have been required to be labeled since 2008, but labeling proponents and members of the government decry gaping loopholes.

The Ministry of Trade and Industry recently tweaked the law’s language to clearly mandate that any good with ingredients that contain at least 5 percent GM material, even if imported, must be labeled “in a conspicuous and easily legible manner and size.”

If it is “scientifically impractical or not feasible to test goods” then companies must put a similar label on the goods stating “may contain genetically modified ingredients or components.”

The draft update hasn’t yet been made into law, and the ministry couldn’t say when it would be.

-How many hectares/acres of land are GM crops grown on?

In 2012, South Africa ranked as the eighth largest grower of biotech crops with 7.2 million acres (2.9 million hectares), according to the International Service for the Acquisition of Agri-biotech Applications.