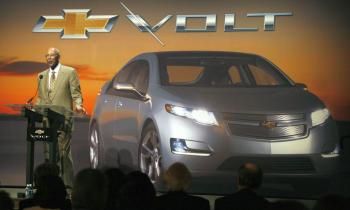 “We expect the Detroit-Hamtramck plant will be the first facility in the U.S. owned by a major automaker to produce an electric car. It is the hub for the wheel that we began rolling in 2007 when the Volt debuted at the North American International Auto Show in Detroit,” said Jon Lauckner, GM vice president of global product planning, in a statement. “Since then, the field of challengers and partners has grown significantly. This competition will expedite the development of electric vehicle technology and infrastructure.”

GM’s future success is largely dependent on the success of the Volt, which has unprecedented fuel-efficiency capabilities. The car is able to travel 40 miles without recharging, and once depleted, an onboard fuel generator will work to recharge the batteries.

The company expects the car to get over 230 miles per gallon (mpg) in city driving, and more than 100 mpg in highway driving—figures that shatter current records in production automobiles. By comparison, the Toyota Prius, currently the best-selling hybrid vehicle on the market, obtains 36 mpg in the city and 29 mpg on the highway.

At the Los Angeles Auto Show last week, GM’s Bob Lutz told reporters that the company will ramp up Volt production carefully, and that he doesn’t see sales take off in the beginning.

Lutz said that GM would build around 8,000 to 10,000 Volt vehicles in the first year of production, according to Reuters. “The cost of technology has to come down,” he said.

Industry officials worry that most Americans may not buy electric vehicles, unless gas tax or the cost of gasoline itself goes up. GM estimates that the Volt would cost roughly $40,000 before a $7,500 federal tax credit.

The Chevy Volt will use batteries from Korea’s LG Chem.