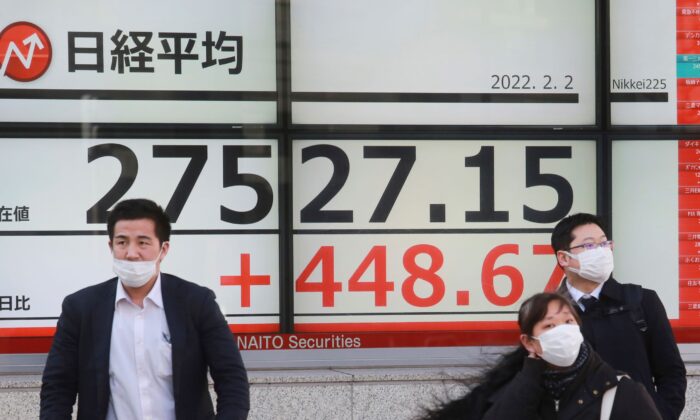 People walk by an electronic stock board of a securities firm in Tokyo, on Feb. 2, 2022. (Koji Sasahara/AP Photo)
Stocks

On Wall Street, the S&P 500 future was up 0.4 percent. That for the Dow Jones Industrial Average was off less than 0.1 percent.

On Tuesday, the S&P 500 gained 0.7 percent, boosted by gains for energy and tech stocks in a late burst of buying. The Dow rose 0.8 percent and the Nasdaq composite added 0.7 percent.

U.S. stocks are coming off their worst month since early in the pandemic nearly two years ago.

Investors are trying to figure out how the economy and corporate profits will be affected by upcoming Federal Reserve rate hikes, intended to cool inflation that has surged to a four-decade high.

Fed officials said in mid-December that plans to wind down bond purchases and other stimulus that are boosting prices would be accelerated to cool inflation.

Investors expect the Fed to hike rates at least four times this year, starting in March.

On Friday, the Labor Department reports U.S. employment for January.

In energy markets, benchmark U.S. crude gained 27 cents to $88.47 per barrel in electronic trading on the New York Mercantile Exchange. The contract rose 5 cents on Tuesday to $88.20. Brent crude, the price basis for international oils, added 30 cents to $90.46 per barrel in London. It fell 10 cents the previous session to $89.16.