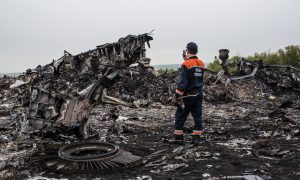 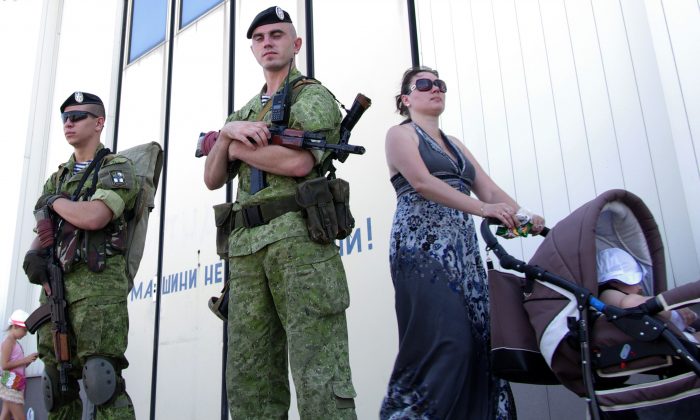 A woman pushes a baby in a stroller as she passes Ukrainian marines patrolling the Black Sea port of Odessa during Ukraine's Navy Day on July 27, 2014. (Alexey Kravtsov/AFP/Getty Images)
Malaysian Airlines Shot Down

In course of 10 days four aircraft have been shot down over Ukraine taking the civil war to a new level of intensity. First came the downing of a military transport aircraft followed in quick succession by destruction of Malaysian Flight 17 and later two Ukrainian Sukhoi SU-25 fighters.

The flurry of destruction and the use of the Russian surface-to-air missile fired by pro-Russian separatists reflect escalation of separatist war into a battle for control of the airspace. The transformation came because Ukraine is slowly winning the battle on the ground against the separatists that began in April.

The investigation into the destruction of Flight 17 has barely begun, but there can be little doubt that Russia and the pro-Russian separatists it has been assisting with weapons and personnel are responsible. The plane, a Boeing 777 with 283 passengers and a crew of 15, was flying at 33,000 feet when hit by a Russian SA-11 missile fired from a Buk, a truck-mounted launching system, operated by pro-Russian separatists in or near Snizhne, a small city 45 miles east of Donetsk and 20 miles from the Russian border.

Photographs taken July 17 in Torez, another small city 10 miles from Snizhne, show a Buk with its missiles covered with a tarp. Video taken a short time later shows the truck driving slowly on the road to Snizhne. The Buk was one of several that entered Ukraine earlier this month. Three Buks were seen crossing the border back into Russia that evening. One of them had three missiles instead of the customary four.

Soon after the plane was shot down, Igor Girkin, a former member of Russia’s Security Service who commands the forces of the Donetsk Peoples Republic, posted an announcement that the separatists had shot down a Ukrainian Antonov 26 transport plane. He also tweeted, “The plane has just been taken down somewhere around Torez. It lays there behind the Progress mine. We did warn you—don’t fly in our sky.” When news emerged the target was a civilian plane, Girkin’s post and tweet were removed.

The next day the Ukrainian Security Service released recordings of several intercepted calls from officers in Russia’s military service taking credit for shooting down a plane: A half-hour after the plane was hit, Lt. Col. Igor Bezler, an officer in Russia’s military intelligence service, reported to Col. Vasily Geranin, his coordinator, “We have just shot down a plane. Group Minera.” In another conversation, a separatist at the crash site said, “These are Chernukhin folks who shot down the plane. From the Chernukhin check point. Those Cossacks who are based in Chernukhino.” Chernukhin is a small town a few miles north of Snizhne.

On July 14, a Ukrainian military AN-26 cargo plane was shot down near the Russian border in the Luhansk region while flying at 21,000 feet. Evidently, as Girkin’s announcement suggested, the passenger plane was mistaken for another AN-26.

The fact that both planes were shot down while flying at high altitudes testifies to the extent to which the insurrection has escalated into a war that includes a battle for control of the airspace over the region in which the separatists are being assisted by Russian operatives and making use of highly sophisticated—and lethal—Russian antiaircraft weapons. Ironically but not surprisingly, the insurrection has escalated into an air war and become more dependent on Russian weaponry because Ukraine has been slowly winning the battle begun in April to recapture the territory held by the separatists.

In mid-June, two weeks after he took office, President Petro O. Poroshenko declared a weeklong unilateral cease-fire in the military operation that had begun in April to take back the territory taken by the separatists.

A week later, as he attended the meeting of the European Council at which Ukraine completed its association agreement with the EU, Poroshenko extended the cease-fire for three days. However, more than two dozen Ukrainian troops were killed during the 10-day cease-fire and political pressure mounted in Kyiv to resume the battle against the separatists.

On June 30, Poroshenko terminated the cease-fire and Ukraine targeted the separatist stronghold in Slovyansk. By the end of the first week of July, the separatists had been driven out and forced to retreat to Donetsk and Luhansk. Since the operation resumed, Ukraine has reclaimed about 30 percent of the territory controlled by the separatists at the peak of their insurrection. In response, Russia provided the separatists with tanks, artillery, and antiaircraft weapons, including several Buks.

The day after the Ukrainian AN-26 was shot down, Ukrainian planes attacked Snizhne and destroyed an apartment building, killing 11. That may explain why a Buk was seen in Torez and on the road to Snizhne last Thursday morning. The stage was set for the tragic mistake that happened later that afternoon.

The day before Flight 17 was shot down the U.S. Treasury imposed targeted financial sanctions on two Russian banks, two energy companies, and eight defense firms. The United States, with much less at stake economically in Russia than the European Union, will no doubt broaden those sanctions if Russia refuses to cooperate with the investigation and continues to support the separatists with personnel and weapons.

But the real pressure to do something is on the EU. As President Barack Obama said, Flight 17 is “a wake-up call for Europe.” Throughout the Ukraine crisis, the European Union has waffled when confronted with the challenge of responding to Russia, first after its takeover and annexation of Crimea and then after it started providing covert support for the pro-Russian separatists in eastern Ukraine.

With many member states fearful of the adverse effects of tough sanctions on their trade with Russia and their economies, the EU has consistently dragged its feet, delayed its response, and then settled for asset freezes and visa limitations on individuals that have had no discernible effect on Russian policy.

And so it was again July 22, when the EU’s Foreign Affairs Council discussed how to respond to the destruction of Malaysian Flight 17 over eastern Ukraine. The Foreign Affairs Council agreed to accelerate the preparation of additional targeted sanctions on individuals as agreed by the European Council last week and requested the commission and the European External Action Service finalize their preparatory work for targeted measures involving access to capital markets, defense, and the energy sector. But it failed to impose, as some member states urged, an embargo on arms sales to Russia or recommend that the European Council impose sector-wide economic sanctions.

In all, more than 200 EU citizens lost their lives. The time for waffling is over. The EU must speak decisively and forcefully for the victims of Flight 17 and for all those who have lost their lives in the violence in eastern Ukraine. It should make it clear that if Russia does not cooperate with the investigation, stop providing the separatists with personnel and weapons, and assist in ending the insurrection in eastern Ukraine it will impose tough sanctions on Russian firms in the financial, energy and defense sectors.

David R. Cameron is a professor of political science at Yale and director of the program in EU Studies. © 2014 The Whitney and Betty MacMillan Center for International and Area Studies at Yale.