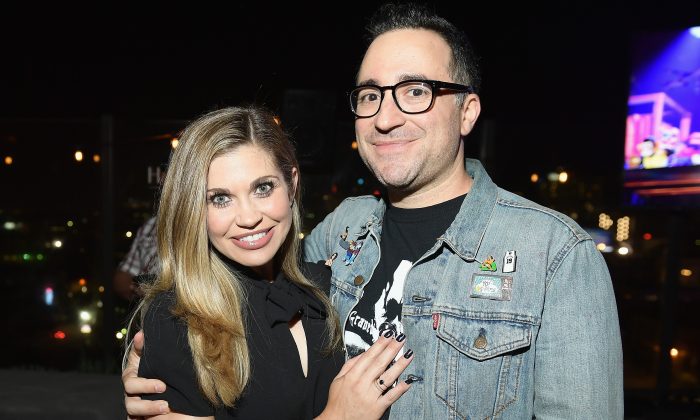 Actress Danielle Fishel has shared that she and her husband, producer Jensen Karp, are pregnant with their first child.

Fishel, 37, posted a photo of baby shoes on Instagram, saying she was on an emotional roller coaster preparing for the baby.

“GUYS. We’re having a baby boy. Couldn’t be more excited to raise a sweet little dumpling with @daniellefishel,” wrote Karp. “Even though we used one of those websites and found out it will look like the monster in the next photo.‬..”

‪GUYS. We’re having a baby boy. Couldn’t be more excited to raise a sweet little dumpling with @daniellefishel. Even though we used one of those websites and found out it will look like the monster in the next photo.‬..

Fishel and Karp received hundreds of messages expressing joy and congratulations from friends, family, and fans after the baby announcement.

“Your TV son is so happy you are getting a real-life son. You are going to be the greatest mom EVER, and I should know!” said actor August Maturo, who played Fishel’s son on “Girl Meets World,” according to E! News.

“I couldn’t be more excited. I love you both very much. I’ll help as much as you need but you can juggle 744,886 things at once so maybe you won’t need help,” said actress Angela Trimbur.

The couple has been married since Nov. 4, reported E! News, after becoming engaged in March.

Fishel told Us Weekly in September about her wedding, “I am going to say that it’s not traditional. It’s a little bit quirky, just like we are.” She added, “I am on cloud nine. He is the most amazing partner anybody could ever hope for. And I’m just thrilled. I’m really looking forward to building a life with him.”

Ben Savage, who played Cory Matthews on “Boy Meets World,” and Will Friedle, who played Eric Matthews, were two guests at the ceremony. Fishel played the character Topanga Lawrence on the show.

When you try to take a cool “Reservoir Dogs” kind of shot with your TV brother but are photobombed by John Mayer. Thanks John! My favorite picture of an amazing night at Danielle and Jensen Karp’s wedding! We love you guys! #fishcarp #photobomb #amazingwedding #bridewasstunning #jensenwastheretoo

Fishel has acted in various other roles throughout her career, such as the voice of Pyronica in the television series “Gravity Falls,” along with films “Boiling Pot,” “Dorm Daze,” and “Longshot.”

Karp is executive producer on the television series “Drop the Mic,” and also produced “Baby Talk,” “Scheer-RL,” and “The ArScheerio Paul Show.”

This is Fishel’s second marriage after she divorced business manager Tim Belusko in 2016. They were married for two years.