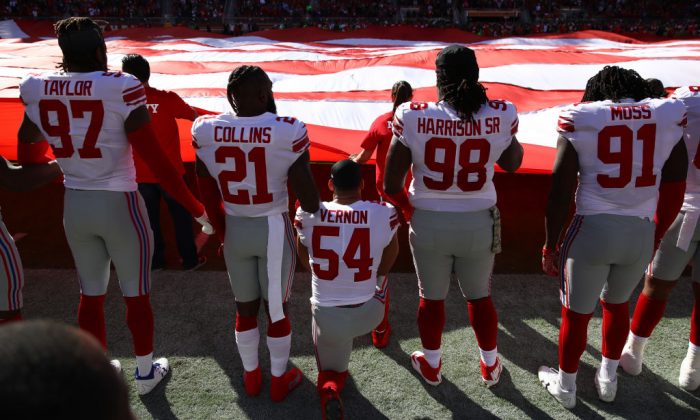 Olivier Vernon #54 of the New York Giants kneels during the national anthem prior to their NFL game against the San Francisco 49ers at Levi's Stadium on Nov. 12, 2017 in Santa Clara, California. (Ezra Shaw/Getty Images)
NFL

Giants’ Olivier Vernon Has Message to Fans Who Disapprove of Protest: ‘Don’t Come’

New York Giants defensive end Olivier Vernon, who has made headlines this season for taking a knee during the national anthem, has a message for fans who don’t like it: “Don’t come to the game.”

Vernon said he’s been heckled by fans for taking a knee all season long.

“You hear ‘coward’ and ‘stand up’ and ‘disgrace,’” Vernon told the New York Post. “It’s fine. As long as nobody comes on the field and touches me. You stay where you at, you’re going to be all right. They have a right. Oh yeah, I hear it all the time. If they don’t like it, don’t come to the game.”

He added: “I’m fine where I’m at right now. Ain’t nothing wrong with feeling bad for what you believe in. What’s right is right and what’s wrong is wrong. I stand behind my beliefs.’’

Vernon, whose retired father was a Miami Police officer for 25 years, said he was happy to hear that the NFL and its teams will donate $90 million to social causes deemed important by players.

“Making progress, moving forward,’’ Vernon said to the Post. “I don’t know all the logistics of everything right now, but it sounds likes it’s great movement to a good direction.”

Can you believe that the disrespect for our Country, our Flag, our Anthem continues without penalty to the players. The Commissioner has lost control of the hemorrhaging league. Players are the boss! https://t.co/udXP5MR8BC

On #Thanksgiving dude? While the Anthem is sung by a Master Sergeant of the United States Army to honor the United States of America ? Disgusting and dispicable. Turning off the game #NFL pic.twitter.com/LtzvPm4Yt4

“Here is a guy you gave $80 million to basically telling your fans, ‘If you don’t like it, don’t come,’” said Esiason on WFAN, according to the Washington Times. “It is the most egregious act of defiance. It just blows me away.”

On a Thanksgiving Day game between the Washington Redskins and Giants, Vernon’s antics drew the attention of President Donald Trump, who appeared to refer to Vernon in a tweet about anthem protests. Vernon had taken a knee during that game, triggering scorn from viewers on social media.

“Can you believe that the disrespect for our Country, our Flag, our Anthem continues without penalty to the players,” Trump tweeted on the next day. His tweet included a link to a message from Dan Scavino Jr., the White House director of social media, who noted that Vernon took a knee “while NFL ratings continue to plummet.”

According to The Associated Press,18 players—including Vernon—protested during Sunday’s game.

We have a small favor to ask of you. If you can, please share this article on Facebook so you can help The Epoch Times continue to bring you important and interesting articles. It takes less than a minute. Thank you very much!