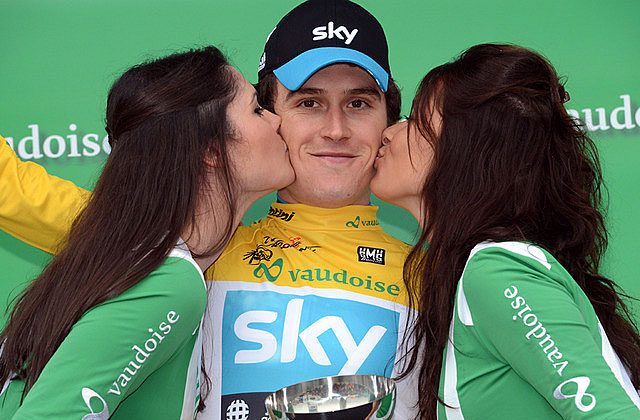 Gerraint Thomas of Sky Procycling won the Prologue and leader’s yellow jersey at the Tour of Romandie. (skyteam.com)
Cycling

Gerraint Thomas of Sky Procycling beat the rain to win the Prologue of the Tour of Romandie cycling race. Rain, which started shortly after the start of the race, made the 3.3-km Prologue course dangerously slick and added ten seconds to the times of all the riders who started later in the day.

Thomas was in perfect form for the short prologue; he has spent the past several weeks riding Pursuit events for the Sky track cycling team. Training for those four-kilometer races set him up perfectly the opening stage of Romandie.

“It’s a nice little win the team told me I was racing here about ten days ago so it was great to come here. I always knew I’d be up there,” Thomas told Eurosport. “Fortunately with the rain, conditions played into my hands a bit, but there was only really one corner anyway—there is only so much time you can lose in one corner.”

The Sky rider was quick to explain that he wasn’t looking for stage wins; his job was to help sprinter Mark Cavendish and team leader Bradley Wiggins, who was looking to win the General Classification.

“For myself, it’s purely a team role. I’m here to help out in the sprints, wherever they come and obviously Bradley’s going for the GC as well, Thomas said. “Coming from the track I don’t really have the climbing legs at the minute, but it’s all goods work before the Giro [the 21-stage Giro d’Italia starts May 5].”

Thomas didn’t even favor his chances in the final stage, the 16.5-km individual time trial.

“It’s a bit long for me, and a bit steep. I’ve been used to four K the last couple weeks, with the track, but I’ll give it everything I’ve got.”