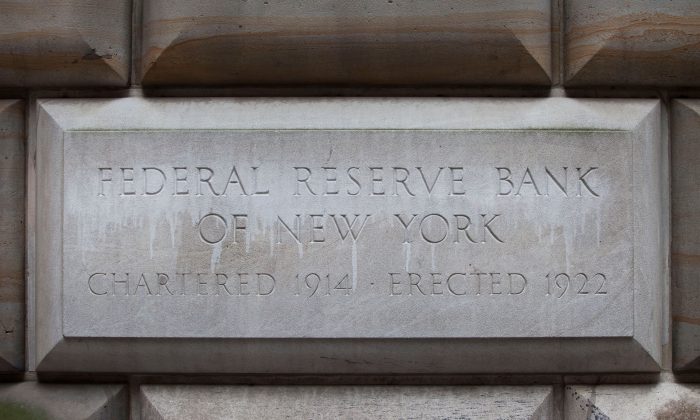 Germany is the second largest holder of gold reserves with 3,381 tonnes (3727 U.S. tons), but it did not store most of the gold at home—at not least until recently.

Germany sent its gold overseas in the first place during the Cold War, afraid the Russians would raid the vault in Frankfurt in case of an attack.

Almost 25 years after the fall of the iron curtain, it makes sense to have more gold at home, especially given the uncertain financial climate. But there are a couple of odd things about the transfer.

Assuming there are 6,700 tonnes of gold stored in the vault as the Fed says on its website, why could they not ship the 300 tonnes Germany requested in 2013 in one fell swoop. It is Germany’s gold after all and Venezuela didn’t have any trouble shipping 160 tonnes back to London and some private vaults in only two short months in 2011.

Perhaps the gold isn’t actually in the Fed’s vault and had to be sourced from somewhere else? This would explain why Germany only transferred 5 tonnes in 2013 from New York. In 2014, it had reached 85 tonnes and now in 2015 100 tonnes.

2. Why Doesn’t the German Central Bank Provide Details on the Bars?

The other odd element is the lack of details offered concerning the gold shipped. Gold bars normally carry a serial number, an indication of purity, and where they were refined. In large shipments and even for gold Exchange Trade Funds, a list of the bars and their properties are usually made public.

Germany’s central bank didn’t include any of those and just included this statement in its press release.

“The Bundesbank assures the identity and authenticity of German gold reserves throughout the transfer process–from when they are removed from the storage locations abroad until they are stored in Frankfurt am Main. Once they arrive in Frankfurt am Main, all the transferred gold bars are thoroughly and exhaustively inspected and verified by the Bundesbank. When all the inspections of transfers to date had been concluded, no irregularities came to light with regard to the authenticity, fineness and weight of the bars.”

Of course, by just making this statement and not providing any details, the bars could have come from just about anywhere and don’t necessarily have to be the original bars Germany deposited in the vault in the first place.