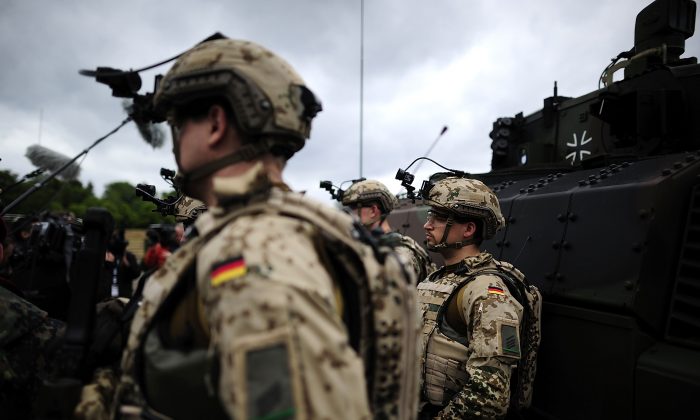 BERLIN—The German Cabinet approved plans Tuesday to commit up to 1,200 soldiers to support the international coalition fighting the Islamic State group in Syria.

The mandate still requires parliamentary clearance but Chancellor Angela Merkel’s governing coalition has a huge majority and its approval looks assured. Senior lawmakers from her conservative bloc expected a vote on Friday.

Following the Paris attacks, Merkel agreed to honor a request from France to provide support for its operations against IS in Syria.

Germany plans to send up to six Tornado reconnaissance planes, tanker aircraft and a frigate to help protect the French aircraft carrier Charles de Gaulle in the eastern Mediterranean, but won’t actively engage in combat.

Two Tornados and a tanker could be sent to Turkey’s Incirlik air base next week if parliamentary approval comes this week, though for logistical reasons reconnaissance flights won’t start before January, Defense Ministry spokesman Jens Flosdorff said.

Foreign Minister Frank-Walter Steinmeier told the daily Bild he doesn’t expect Germany to have 1,200 soldiers participating at any one time. He said that upper limit includes a significant “safety buffer.”

“We are doing what is militarily needed, what we can do best and can accept politically,” he said.

Left-leaning opposition parties in Parliament are deeply skeptical, questioning whether there is sufficient legal basis for the move.

“The legal question is not the only one,” Simone Peter, a leader of the Greens, told ARD television. “We say clearly that this deployment also has no political aim, no political concept, and so it is irresponsible.”

The German military’s biggest current foreign deployment is in NATO’s Resolute Support training mission in Afghanistan, where it has just under 1,000 troops. It had some 5,000 soldiers there at the height of the previous combat mission.

Germany also plans to increase its involvement in Mali, where it currently has just over 200 soldiers.