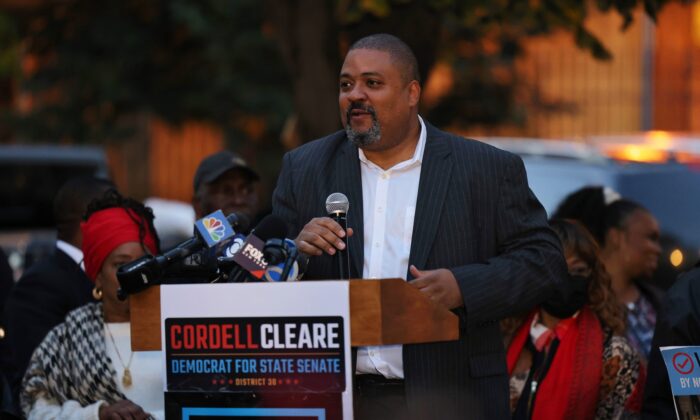 District attorney candidate Alvin Bragg speaks during a Get Out the Vote rally at A. Philip Randolph Square in Harlem in New York City on Nov. 1, 2021. (Michael M. Santiago/Getty Images)
Viewpoints

George Soros’ Many Gifts to the Republican Party

I would like to thank George Soros for raising my property values.

Okay, that’s a joke (sort of), but it’s hard to imagine, given the news reported by the NY Post Wednesday—Manhattan DA to stop seeking prison sentences in slew of criminal cases—that more people will not be continuing the recent trend of decamping New York for Florida, Texas, Tennessee, and a slew of other red states.

In fact, it is likely to increase. Property values hereabouts will sky rocket. Thank you, George.

Why am I thanking Soros? It should be obvious. The billionaire’s habit of opening his very deep pockets to elect “woke” district attorneys across the country has been remarkably successful. He, more than anyone, is personally responsible for the crime wave currently engulfing America with murder rates in our big cities the highest in decades.

That, as much as anything, is sending people out of the blue states on what is called in the country classic “Wagon Wheel,” “the Southbound Train.”

That the vast majority of those murders are black on black doesn’t seem to have deterred George (although he surely must know it because the statistics are widely available), nor does it appear to deter Alvin Bragg, the newly elected black Manhattan DA.

They—the mayor of Chicago, the DAs of Los Angeles, Philadelphia, Baltimore, and many others—don’t seem to care about this. They apparently have other priorities. Like Black Lives Matter itself, they don’t seem to think black lives actually do matter. Power (theirs) is all that matters. And that they look good. (To whom, I wonder?)

The people who really do care about black lives are the people who are supposed to disdain them—the cops (many of whom are themselves black).

According to the Post, one high-ranking policeman said of Bragg’s new dictum that his office “will not seek a carceral sentence” except for homicides and a “handful” of other felonies, “It will lead to more young lives lost to gang violence and innocent people being hurt both physically and emotionally.”

Another added: “This is outrageous. He was elected to enforce the law. If he wanted to change them, he should have run for a state office.”

True enough, but as some woman once said of another crime that was never punished, “What difference does it make?” The police have been leaving New York too. More will now.

Bad, even horrific, as that is, we do have something to thank George Soros for that is considerably more important than whatever jokes we want to make about red state property values.

More than anyone—with the possible exception of the current resident of the White House—George Soros will be responsible for a sweeping Republican victory in 2022 and possibly 2024.

The voters certainly care about COVID, but almost as much, more when COVID dwindles, they care about public safety. And they should. If a government owes its citizens anything, it owes them not to be gunned down by criminals in the streets. Next to that, everything else is moot.

By ignoring that obvious fact, Soros—I have to assume inadvertently—will have put the very people he despises back in office.

So, as I said, we should thank him for it.

But it’s also interesting to speculate on his motives. Why does he hate America so much, because that is the only explanation for supporting such policies. If you want the inner cities to remain inner cities, there’s no more efficient way than to make sure crime is rampant.

I imagine he wants to bring about our destruction, but for what? Some form of communism or communist globalism?

The irony is that Soros first came to the world’s attention for his work to free Eastern Europe from communism.

And then there’s the curious tale of his lack of guilt for his and his father’s betrayal of his fellow Jews during the Holocaust. This came to a head in a famous interview on 60 Minutes that Soros himself evidently tried to have banned. You can see it here for yourself.

Putting all this together is difficult. ’Tis,’ as Yule Brynner once sang, “a puzzlement.”

What isn’t so puzzling is what’s happening to the once great… or even greatest… city of New York. It’s an American and world tragedy. And given the way the city’s been governed in recent years, it’s hard to see how it can turn around for a long time.