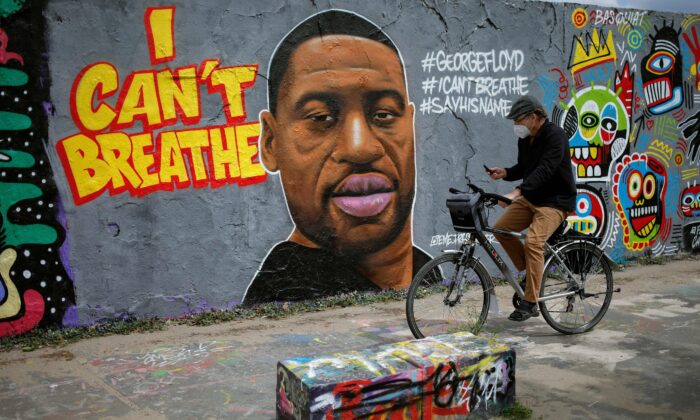 A man cycles past a mural depicting George Floyd, who died in Minneapolis in police custody, in Berlin, Germany, on May 30, 2020. (David Gannon/AFP/Getty Images)
US News

George Floyd’s Brother to Testify in House Hearing on Policing

Philonise Floyd, one of George Floyd’s brothers, is set to testify before the House Judiciary Committee this week, a spokesperson confirmed.

George Floyd died after a Minneapolis officer, Derek Chauvin, pinned a knee on Floyd’s neck for nine minutes during an arrest. A video of Floyd’s death, recorded by a bystander, triggered national outrage, peaceful protests, riots, arson, and fatal attacks on police officers.

Chauvin was fired and has been charged with second-degree murder, while three other officers at the scene were charged with aiding and abetting.

His two brothers, Philonise and Terrence Floyd, have addressed crowds in Minneapolis and New York and said there needs to be an end to police brutality and change in policing of black communities.

“The vice president, I loved his conversation. He talked to me for like 10, 15 minutes. And I was trying to talk his ear off because he was talking to me constantly. Great conversation. But Trump, it lasted probably two minutes,” Philonise Floyd told CNN. “It was very brief. The conversation was OK with him. I was just respecting him, you know listening to what he had to say.”

“I asked Vice President Biden—I never had to beg a man before—but I asked him, could he please, please get justice for my brother,” he told MSNBC. “I need it. I do not want to see him on a shirt just like the other guys. Nobody deserved that. Black folk don’t deserve that. We’re all dying. Black lives matter.”

About a week after riots and looting, several cities have lifted curfews, including Chicago and New York City, where the governor urged protesters to get tested for the virus and to proceed with caution until they do. Leaders around the country have expressed concern that demonstrations could lead to an increase in COVID-19.

For the first time since protests began in New York more than a week ago, most officers on June 7 weren’t wearing riot helmets while monitoring the rallies. Police moved the barricades at the Trump hotel at Columbus Circle for protesters so they could pass through.

Some officers shook hands and posed for photos with motorcyclists at one rally.

In Compton, California, several thousand protesters, some on horseback, peacefully demonstrated through the city, just south of Los Angeles. The only law enforcement presence was about a dozen sheriff’s deputies, who watched without engaging.