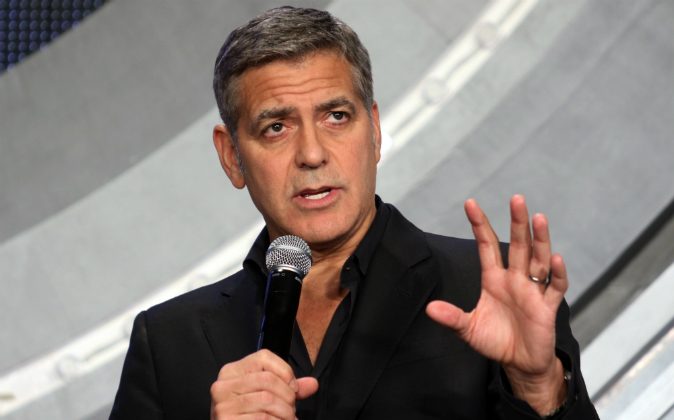 US movie star George Clooney speaks at the Japan premiere of his latest movie 'Tomorrowland' in Tokyo on May 25, 2015. (YOSHIKAZU TSUNO/AFP/Getty Images)
Entertainment

George Clooney has previously graced the cover of “Esquire” eight times—all as an unmarried man. In his ninth cover for Esquire’s May 2016 issue, the “Hail, Caesar!” actor discusses President Barack Obama, Donald Trump, his legacy—oh and the woman that changed his marital status from single to married, Amal.

“I’ve never been happier in a relationship by any stretch of the imagination,” said Clooney about his wife Amal Alamuddin. “At 52 I found the love of my life and I’m really happy.”

Clooney and Alamuddin, a human rights lawyer were married in a Venice ceremony in 2014. The couple share a common interest in humanitarian work.

As I’ve gotten older and as I’ve gotten more secure in my life, there are a lot of other things that I care about more.
— George Clooney

George Clooney, born to Irish immigrants, rose to fame when he played Dr. Doug Ross on the show, “ER” in 1994. The fame bug bit Clooney fairly late at age 33, something he is okay with.

“Now everybody’s got a phone. If all this stuff existed when I was 25, it’d be me getting carried out of some bar by my feet,” said Clooney. “Cuz I did it all. I had all the fun that you should have. And it would have been multiplied by 10 times had I been famous and rich. I’m just lucky that the advent of camera phones happened when I was 43 years old or something.”

The 54-year-old actor has a famous friend and basketball buddy in President Barack Obama, who he describes as “deeply funny.”

“Truth of the matter is, in my lifetime certainly there’s never been a president who’s been up against so much obstructionism. There just hasn’t been. Period,” stated Clooney. “I don’t give a [expletive] what anybody says. Yet he’s managed to do an awful lot of things, and he’s had to do it with a sense of humor that I wouldn’t have kept.”

If there’s a legacy for me, it’s yet to be written.
— George Clooney

As for the tactics Trump continues to use in his quest to become president, Clooney considers his method problematic:

“That is the real problem with Trump—his ideas bleed into the rest of the world. That he says, ‘I’m gonna find every terrorist, and I’m gonna find their family, and I’m gonna execute them.’ I’m not gonna let him walk away from that. I’m gonna execute a family?!” stated Clooney. “That’s a war crime of the highest level that no one would do. When you say that, that tells all the other people, Okay, well, if they’re saying that, then why don’t we?”

Clooney continues to take on acting jobs, and focusing on bringing relief to parts of the world that, at times, get ignored.

“Amal and I are working on things now that matter to us on a whole other level, in a whole other world. If there’s a legacy for me, it’s yet to be written.”