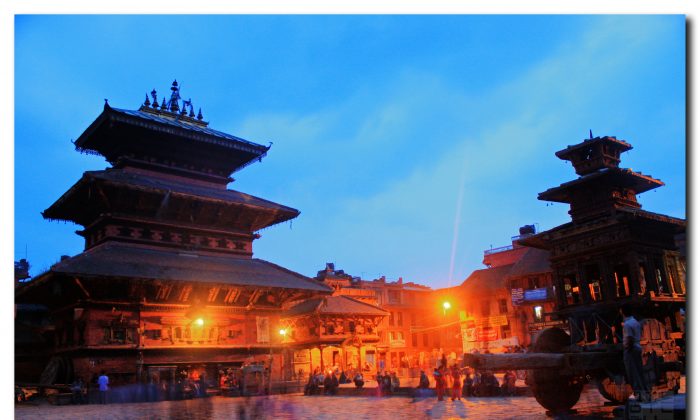 "Everybody in the field is watching the Himalayan front right now to see if there will be more earthquakes. It's always a possibility, so you start paying attention and looking for clues," says Susan Beck. (Dhilung Kirat/flickr/CC BY 2.0)
Environment

The sudden thrust that caused the tragedy of the Nepal earthquake on April 25 occurred about nine miles underground beneath the Himalayas, releasing built-up stress of unimaginable force along the major fault line where the Indian Plate, carrying India, is slowly diving underneath the Eurasian Plate, carrying much of Europe and Asia.

The shudder raced around the planet, grazing the boundary where the Earth’s molten core meets the so-called mantle of partially molten rock, at a depth of about 1,800 miles.

Fifteen minutes later, the temblor reached Tucson, Arizona, too weak to be felt by anyone but with enough force to send a stir through a highly sensitive instrument locked in a vault deep in the granite of the Santa Catalina Mountains just north of the city.

“Even though this devastating earthquake happened halfway around the world, more than 8,000 miles away from us, there was enough of vertical ground displacement that our seismometer recorded it,” says Susan Beck, professor of geosciences at the University of Arizona. “Any earthquake this large is registered all around the world, in real time, and the data are being published globally within minutes.”

When Will It Rupture Again?

When a quake of the magnitude of the one in Nepal—7.8 on the Richter scale—occurs, seismologists like Beck immediately look at the data and analyze them for the potential of aftershocks.

“When anything this size happens, our group is on it because we know how devastating these are, and we use the opportunity to learn something,” Beck says.

Researchers are studying where the faults are at depth along that plate boundary. The last big earthquake in the region occurred in 1934, just to the east of where the most recent quake hit. Registering at 8.2 magnitude, that tremor, too, caused much damage and loss of human life.

“India and Eurasia collide, and all that pressure builds up the Himalayas in Tibet and Nepal,” Beck says. “So we have known these earthquakes happen in that region, but this one didn’t rupture quite up to the surface of the fault—unlike, for example, in California, where we see a trace on the surface along the San Andreas Fault.

“In the case of the Nepal quake, we don’t see any offset at the surface. Therefore we share some concern that it may rupture in the future, causing another earthquake. We don’t know if and when that might happen, but we know the fault is capable of doing that.”

There is a possibility the fault could slip aseismically, meaning “it just creeps, instead of releasing the pressure in another earthquake, but we may not know until a few months or years from now. But it is also possible that it will slip in another damaging earthquake.”

Using data from networks of seismometer stations across the globe, seismologists can—to a certain extent—tell the outline of a fault deep underground. Geologists do this by measuring the arrival times of two shock waves caused by a quake: the primary wave is the first seismic arrival that comes to the station from the epicenter. It is followed—usually within minutes, depending on the location—by a so-called shear wave that travels a bit slower. The delay between the two can give us the earthquake location along with the aftershocks that outline the fault surface.

“If you look at a map over a big area and see where the aftershocks are, you can outline that as an approximation of the fault surface at depth,” Beck says. “Most of the aftershocks tell us where the fault plane is dipping toward the north and extend roughly in a northwest-to-southeast line, along the Himalayan front.”

The seismometer in the Tucson mountains is operated by the US Geological Survey as part of the US Global Seismic Network, which includes about 120 seismic stations and is one of several networks in the world. It’s housed inside a vacuum and a protective vault to keep it out of the elements and mimimize temperature swings between hot days and colder nights. Data are retrieved over the internet to a number of places, where scientists can access them within minutes after an earthquake has happened anywhere in the world.

The instrument is so sensitive “it can feel when someone is up there walking around,” Beck says. “We record anything from construction on Catalina Highway on Mount Lemmon to mine blasts and landslides like the one that recently happened in Sabino Canyon.”

Peter DeCelles and Paul Kapp, both professors of geology and members of University of Arizona’s Tectonic Group,  work on geologically active regions around the world, especially mountain building zones such as the Andes, the Himalayas, and the Rockies, in addition to other earthquake-prone regions such as the Mediterranean to estimate the geometry of what faults like the one that ruptured in Nepal are like at depth.

“They have a pretty good idea where these faults are, and it’s pretty clear that the earthquake happened on one of those faults,” Beck says. “Everybody in the field is watching the Himalayan front right now to see if there will be more earthquakes. It’s always a possibility, so you start paying attention and looking for clues.”

The area of the Nepal earthquake is one of the most earthquake-prone places on the planet, Beck says.

“People know that, just like we know the San Andreas Fault is capable of earthquakes, so it’s not so much an issue of ‘geologic forecasting’ if you will, but more of a social issue,” she says.

“It takes money to retrofit buildings and reinforce bridges and so forth. Many people work at the interface of science and policy to help people prepare, and there are lots of things you can do as a community and a city, but if you live in a place where buildings are old and need to be retrofitted, especially historic sites, the costs are enormous. What you can hope to do is make new construction better.”

It’s important for people in areas affected by earthquakes to realize that it’s a fallacy to think that “now that the earthquake has happened, the fault has slipped, we should be good for a while,” she says.

“The message we want to get out there is that if you live in that region, you can’t assume that you’ll be OK for another hundred years. We know that the fault is much bigger than the area of this earthquake. We can’t quantify the likelihood, but we want to try to prepare and at least let people know they have to be careful.”