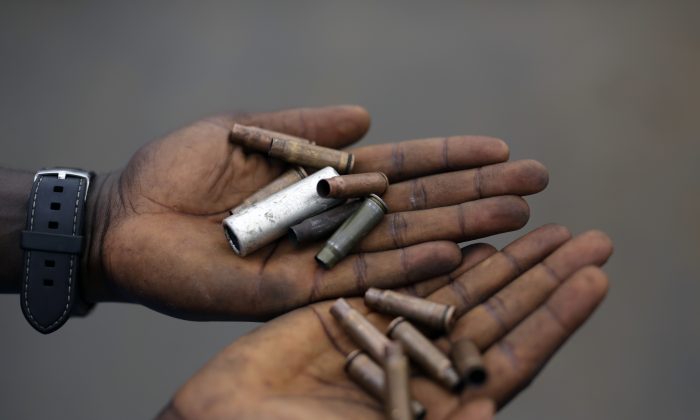 Demonstrators display cartridges from police guns fired in the Musaga neighborhood of Bujumbura, Burundi, on May 20, 2015. Police returned to the neighborhood in full force on May 20, firing live rounds and tear gas to disperse demonstrators protesting the president's decision to seek a third term. (AP Photo/Jerome Delay)
Africa

Genocidal Rhetoric on the Rise in One African Nation

Located in central Africa, the small nation of Burundi is on the brink of civil war once again. In April, current President Pierre Nkurunziza announced that he would run for a third term, a decision denounced by the opposition as a violation of the nation’s constitution. His subsequent election in July was widely criticized by the international community.

Since Nkurunziza’s April announcement, many civilians and political groups opposing Nkurunziza’s decision have taken to the streets to protest. In response, Burundian security forces have met the protesters with brutality, killing hundreds and sending hundreds of thousands more fleeing the country. Opposition groups have retaliated by taking up arms and unleashing their own wave of attacks against government installations and officials. As tensions increase, the violence escalates, and the bodies accumulate, it is crucial for the international community to respond wisely.

Why Should the International Community Be Concerned?

The renewed violence between the government and opposing political and rebel groups has the potential to spiral out of control and further destabilize Burundi and the region. Tom Perriello, the U.S. Special Envoy for the Great Lakes Region of Africa, has explicitly warned that the conflict has the potential to plunge the country back into civil war.

The renewed violence between the gov’t and opposing political and rebel groups has the potential to spiral out of control and further destabilize Burundi and the region.

Burundi has a history of ethnic and political violence that has led to two genocides.

If the conflict is not resolved quickly, the regional implications will be severe. Neighboring nations such as Tanzania, Rwanda, and the Democratic Republic of the Congo are already facing a growing refugee crisis, as more than 200,000 people have fled Burundi. Furthermore, the potential for neighbors, particularly Rwanda, to intervene increases by the day.

Similar to Burundi, Rwanda has a majority Hutu tribe and a minority Tutsi tribe. Some Tutsis in Burundi have received death threats and fear widespread persecution. Rwandan President Paul Kagame, a Tutsi determined to prevent atrocities against fellow tribesmen, will be deeply tempted to intervene if the conflict in Burundi turns to an ethnic war that targets Burundian Tutsis.

In fact, Rwanda may already be involved in the conflict as allegations have surfaced that rebels, with Rwandan assistance, are recruiting Burundian refugees in Rwanda to fight against the Burundian government. These reports have further strained relations between the two nations and illustrate how additional countries could be pulled into the conflict.

In response to the unfolding crisis, United Nations Secretary-General Ban Ki-moon on Nov. 30 initiated the process that will likely send U.N. peacekeepers into Burundi.

The three options proposed by Secretary-General Ban Ki-moon are:

While it is good that the United Nations has recognized the danger in Burundi, the international community should not forget the failed 1994 U.N. peacekeeping operation in Rwanda—a genocide that claimed the lives of roughly 800,000 individuals, despite a significant U.N. peacekeeping presence.

The peacekeeping mission failed Rwandans because its mandate established strict rules of engagement that hindered the peacekeepers’ ability to proactively conduct operations, such as raiding the weapons depots that were essential to the Hutu extremists who perpetrated the genocide. Additionally, the majority of peacekeepers in Rwanda were ill-equipped and poorly trained and had little support from U.N. headquarters.

It is unlikely a U.N. peacekeeping force sent to Burundi would have the necessary mandate, equipment, and personnel to allow it to protect civilians. In fact, a U.N. human rights official has already said that the U.N. is less equipped to handle a peacekeeping operation in Burundi than it was in Rwanda. It would be foolish of the international community to trust that a U.N. operation is the answer.

The African Union (A.U.) has stepped up with a proposal to send a 5,000-man-strong peacekeeping force to the country. Burundi’s neighbors have a strong incentive to halt the violence there, but the Burundian government has rejected the plan thus far. The international community cannot afford to simply give up, however, and must continue devising alternate strategies that involve a combination of regional and global actors.

Recently, a clash between government forces and opposing rebel groups left 87 people dead, many of whom were slain execution-style. The warning signs are clear. The events unfolding in central Africa have the potential to plunge a fragile nation back into the horror from which it only recently escaped.

Jonathan Reich is a member of the Young Leaders Program at The Heritage Foundation. Copyright The Daily Signal. This article was previously published on DailySignal.com.