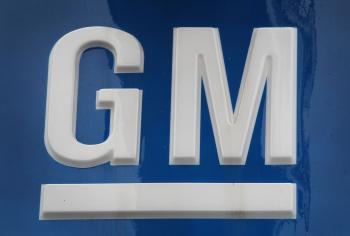 A General Motors Co. logo hangs above a Chevrolet dealership this past April in Chicago, Illinois. GM said on Tuesday that its July auto sales were up 5 percent from June. (Scott Olson/Getty Images)
Business & Economy

Antonio Perez
View profile
Follow
biggersmaller
Print
General Motors Corp. (GM), the largest automaker in the United States, said on Tuesday that its July auto sales were up 5 percent from June, solidifying the current recovery in the automobile market. Sales of GM’s four major brands—Cadillac, Chevrolet, GMC, and Buick—were up almost 25 percent from the same period in 2009, the company announced.

GM said that 2010 full-year forecast remains unchanged, at between 11.5 to 12 million units. "When we say we want to design, build, and sell the world's best vehicles, we're not talking about just one vehicle, one brand or one month," Don Johnson, vice president of U.S. sales, said in the company’s July sales report. "Our July results again reflect that each of our brands has contributed significantly to our gains."