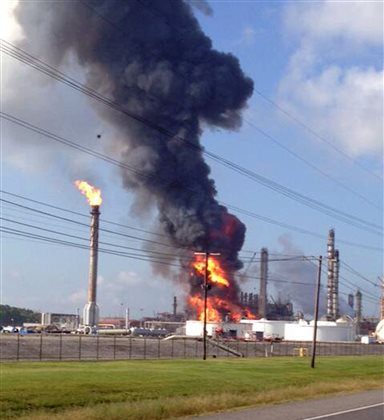 This photo provided by Ryan Meador shows an explosion at The Williams Companies Inc. plant in the Ascension Parish town of Geismar La., Thursday, June 13, 2013. The fire broke out Thursday morning at the plant, which the company's website says puts out about 1.3 billion pounds of ethylene and 90 million pounds of polymer grade propylene a year. (AP Photo/Ryan Meador)
US

A Geismar plant explosion left one person dead and 73 people injured on Thursday. Louisiana officials said one person was in critical condition.

Louisiana state Sen. Troy Brown, whose office is less than five miles from the Williams Olefins plant, told the Times-Picayune: “I actually heard the explosion and I actually felt the explosion.”

Thirteen people were airlifted via helicopter, 23 by ambulance, and 24 by vehicles to nearby hospitals, according to the paper. The plant is located between Baton Rouge and New Orleans.

A police spokesman told NBC News that the chemicals in the plant pose no threat to locals.

“They’re not leaving a compound, they’re not going into the air, they’re burning off,” state police Sgt. J.B. Slaton was quoted by NBC as saying.