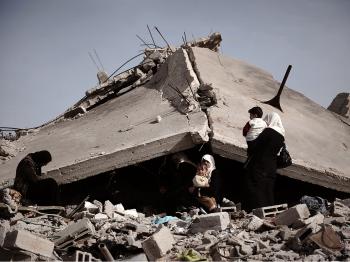 A Palestinian family sits on the rubble of their destroyed house following Israel’s 22-day offensive in Gaza on January, in the northern Gaza Strip district of Jabalia. (Olivier Laban-Mattei/AFP/Getty Images)
Middle East

Who Will Rebuild Gaza?

By Ben Kaminsky
biggersmaller
Print
TEL AVIV—As the bombings stop, the smoke dissipates, the soldiers leave, and reporters arrive in the Gaza strip, people are realizing the scope of the damage to area.

Operation Cast Lead, as the conflict was called by Israel, has left the Gaza Strip devastated, and huge amounts of money and resources will be required to rebuild it.

Now, the next battlefield in this operation is beginning to take shape as politicians on all sides decide how to and who will rebuild the war-torn Gaza Strip and thus strengthen their influence with the Gazan people.

After the ceasefire began on January 17, Gazans went out to the streets and started to rebuild their lives. Dead bodies were removed from the rubble, and many received medical assistance for the first time since the fighting began in December.

”I started to tour Gaza to see the mass destruction and devastation," said a young journalist and blogger from the Gaza strip named Sameh Akram Habeeb in a phone interview with The Epoch Times.

"Many have lost their houses, and they have no shelter now."

He said that some have found shelter in schools, but that the weather is cold and many are left with nowhere to stay.

"Destruction is everywhere,” he says. He says that water, power, telecommunications, and sewage systems have all been damaged. Farm animals were killed. And tragic stories fill the streets, such as that of the Samune family of Zaytoon neighborhood, which he met on his tour. This one family lost over 30 of their relatives he says.

Hakim Hasina was a successful Gazan businessman who relied on relations with Israelis, but after the closing of the border he could not go on with his business. However, on Monday he said optimistically in fluent Hebrew, "the state of the ceasefire now is a good sign for both people."

"We’ve had enough fear of aircraft and shootings. Now, thank God, calmness […] we like peace, we want peace," he says.

Habeeb says that the Palestinians have felt for a long time that Israel is performing mass punishment on all Gazans, which increases hatred against the Jewish state.

If Israel wants people to believe its claims that it only targeted Hamas militants and not civilians, something that many Gazans find hard to believe, Habeeb says it will need to "show kindness and care […] and apologize to those citizens by compensating them and reconstructing Gaza."

Habeeb explains that currently there are two main camps when it comes to analyzing the crisis in Gaza—the camp of Hamas and its supporters like Iran, Syria, and Qatar, and the camp of Palestinian Authority president Mahmud Abas supported by the U.S., Egypt, Saudi Arabia, and other more moderate Arab countries.

Recognizing the political capital that will be gained by the parties that rebuild the Gaza strip, the Israeli Foreign Ministry has formed a think tank with one of its goals being to prevent Hamas and Iran from taking control over the efforts to reconstruct Gaza, according to a report by Israel’s Haaretz newspaper.

"It is quite obvious that the reconstruction is going to be the next part of the battlefield, the next political battlefield," Shlomo Brom of the Israel-based Institute for National Strategic Studies explained to The Epoch Times.

He believes that during the next year a competition between the Hamas-related factions and the moderate Arab countries will take place. He also says that the international community, i.e. the U.S. and Europe, will also want to emphasize reconstructing Gaza.

Brom explains that to prevent Hamas from taking the credit for reconstructing Gaza, the moderate countries will try to pass their support through the Palestinian Authority, while Hamas will try to prevent that and force them to assist Gaza through Hamas.

This might cause the reconstruction process to be long and awkward, he says.

As long as Hamas is controlling Gaza, Brom says that Israel will not be able to provide direct assistance and will instead have to assist through international organizations.

Many are looking to the United Nations Relief and Works Agency (UNRWA) to facilitate the reconstruction.

According to the UNRWA Web site, currently 750,000 Gazans rely on UNRWA for food assistance, 200,000 children attend 221 UNRWA schools throughout Gaza, and they operate 18 health centers in the area.

But Dr. Eli Carmon of the International Institute for Counter-Terrorism in the Interdisciplinary Center of Herzlia claims, "UNRWA has actually been in Hamas' control for a few years—all of the medium and high Palestinian officials are somehow Hamas members." He claims that those officials make sure that aid from UNSRWA will be transmitted through those who are related to Hamas.

Israeli veteran military reporter and commentator Ron Ben Yishai explained to The Epoch Times, "that whoever reconstructs Gaza will be the one who determines who will manage Gaza and they will be able to determine, to a large extent, the speed of re-strengthening of Hamas."

"Therefore, there is a real battle over reconstructing Gaza, and it is expected that Abu Mazen [Mahmud Abas], Europe, and Egypt want to do it. That is the reason for the Sharem El-Sheikh conference," he says. At the same time Iran has hurried to announce that it will assist in the reconstruction efforts.

Ben Yishai explains that Israel has a lot of influence on this issue, because it controls the crossings. Israel could monitor goods being transferred to the Gaza Strip, and also make it hard on Iran to transfer money to Gaza.

He also thinks that Israel is interested in assisting the reconstruction, and besides the political advantage of such an act, it will also assist Israel economically. But Hamas, he says, will not want Israel to be involved inside the Gaza Strip, and for the same reason, Hamas is not interested in letting the Palestinian Authority be involved in reconstructing Gaza, which could give it political power.

Dr. Carmon believes that Israel and other countries might use the reconstruction of Gaza as a way to further suppress and overpower Hamas. He believes that Hamas now cannot control the population with its resources and means.