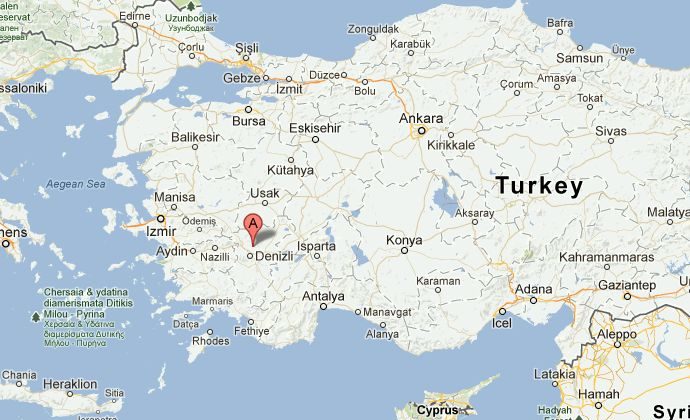 The location of the ancient city of Hierapolis in southern Turkey. (Screenshot of Google Maps/The Epoch Times)
Europe

‘Gate to Hell’ in Turkey Found by Archaeologist

Scientists have found an ancient cave known as the “gate to hell,” or Pluto’s Gate, which was described as the gateway to the underworld in Greco-Roman mythology.

Italian archaeologists announced the finding of the cave after digging around southwestern Turkey, reported Discovery News.

“This space is full of a vapor so misty and dense that one can scarcely see the ground. Any animal that passes inside meets instant death,” wrote Greek geographer Strabo, who lived around around 64 BC to around 24 AD, according to Discovery.

“I threw in sparrows and they immediately breathed their last and fell,” he added.

Cicero, the famed historian, also made reference to the cave, which was apparently located in the ancient city of Hierapolis.

Italian archaeologist Francesco D’Andria said he has been investigating Hierapolis for years. He said that his team found the cave “by reconstructing the route of a thermal spring.”

D’Andria said he was able to find the ruins of steps, a pool, and a temple inside.

“We could see the cave’s lethal properties during the excavation,” he said. “Several birds died as they tried to get close to the warm opening, instantly killed by the carbon dioxide fumes.”

He added: “People could watch the sacred rites from these steps, but they could not get to the area near the opening. Only the priests could stand in front of the portal,” according to Discovery.

In the 6th century AD, early Christians destroyed Pluto’s Gate. Subsequent earthquakes also might have contributed to the damage.

“According to the tales of the travelers in those times, bulls were sacrificed to Pluto before pilgrimages into the Plutonium. The animals were led by priests to the entrance to a cave from which fetid fumes arose, suffocating them to death,” ANSA writes.