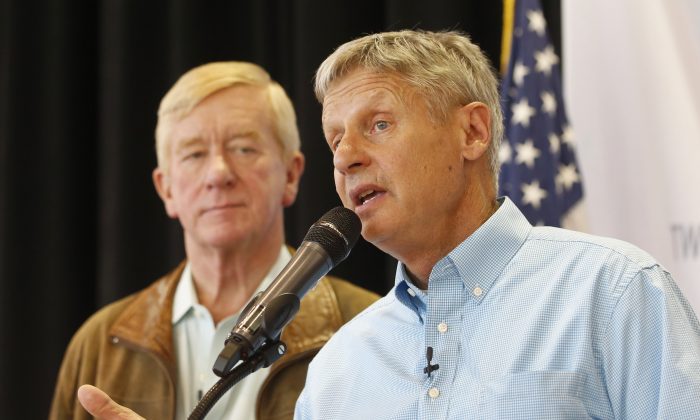 Libertarian candidate Gary Johnson made another embarrassing slip up when he struggled to remember a single world leader in an interview on Wednesday September 28.

Chris Matthews of MSNBC’s “Hardball” asked the Libertarian candidate which was his favorite world leader and Johnson failed to come up with a name. When Matthews pressed him to name any world leader, Johnson continued drawing a blank.

“I guess I’m having an Aleppo moment in the former president of Mexico,” Johnson said referring to an interview on September 8 when he was asked on MSNBC’s “Morning Joe” about what he would do about the Syrian refugee crisis in Aleppo.

“Well which one?” Matthews insisted.

“I’m having a brain freeze,” the Libertarian nominee replied.

“Well, name anybody,” Matthews said to a blank stare.

Johnson’s running mate, former Governor of Massachusetts Bill Weld, tried to save him by mentioning the former Mexican President’s name—Vicente Fox, to which Johnson quickly agreed.

Here’s the video— Gary Johnson says he’s having an “Aleppo moment” when he can’t name a world leader he respects: https://t.co/7oRLTW5Jep

The former Mexican President has been an ardent critic of Donald Trump during the 2016 election cycle. In response to Trump’s debate performance, Fox called the Republican candidate an “imperialistic gringo.” Earlier this year he criticized Trump’s proposed border wall and the two feuded about it on Twitter.

However, mentioning Vicente Fox didn’t satisfy Matthews who asked for a current sitting world leader, which, again Johnson blanked on, before the “Hardball” host turned to Weld and asked him to save the candidate.

Earlier this month, Johnson stumbled over the question about Aleppo, a highly contested battleground in the Syrian conflict, which has since lead to questions about his knowledge of foreign policy.

“What would you do if you were elected about Aleppo?” MSNBC’s “Morning Joe” panelist Mike Barnicle asked the candidate during an in-studio interview on September 8.

“And what is Aleppo?” Johnson responded, seemingly confused at the question.

Johnson faced another major setback when he was excluded from the first presidential debate on September 26 after not reaching a 15 percent average in national polls. The set back came weeks after buying up advertisement space and making media appearances like his appearance on MSNBC.

Following the interview with Chris Matthews on Wednesday night, Johnson campaign spokesman Joe Hunter dismissed the controversy, saying that the question was difficult to answer on the spot.

“Nothing happened. He couldn’t think of any ‘favorites’ because he really doesn’t have any,” Hunter told Politico. “The gotcha crowd is pouncing, predictably. It was a fair question, but tough to answer off the top of one’s head.”