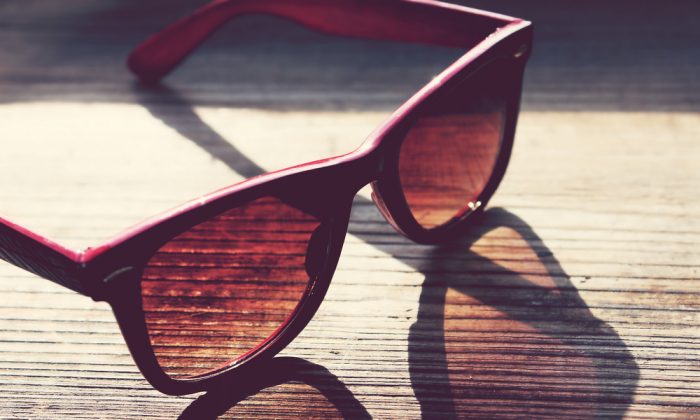 The fame of Lady Gaga is the stand-out phenomenon of 21st-century celebrity—the go-to example for any commentator. But in a recent interview for 60 Minutes she complained that being so famous wasn’t all peachy. Apparently, some people can’t see through her clothes (ironic given the frequency of very sheer fabrics and flesh-baring garments in her kaleidoscopic wardrobe). But what I’m interested in here is how she clothes her face: all too often with sunglasses.

Another Lady G must be given some attention first, though. In 1957 Roland Barthes wrote an essay about Greta Garbo, a Hollywood star with a legendary cool and glamorous mystique. The essay was about Garbo’s face, which she habitually covered with sunglasses out of a desire to recede from public view. Barthes interpreted Garbo’s reticence as a strategy designed to protect her “essence.”

But this was an “essence” fabricated for cinema through layers of “snow-thick” make-up and a constructed invulnerable smoothness. Later, when the aging skin beneath could no longer quite support these technologies of perfection, sunglasses were not enough—the leather of a handbag, used to shield her face from the paparazzi in the 1960s, was needed to mask the truths of the soul told by lines and wrinkles. But for long enough, sunglasses were enough to mask the fact that the Garbo the people were hoping to see, just wasn’t there.

Garbo wasn’t the only one protecting herself with sunglasses. Joan Crawford could be seen arriving on set, without make-up, in hers; and Marlene Dietrich was photographed backstage eating in shades.

As photography became progressively less polite, dark glasses came more and more into play as the first line of defense against the exploding flashbulbs and provocative antics of the 1950s paparazzi, who made a lucrative business of puncturing that veneer of perfection. But no matter how agitated, their eyes remained unreadable—cool.

Sunglasses are now an essential crutch for many celebrities. So much so that they have become a cliché of the aspiring celebrity—a person desperate to be desired by press and public dons them hopefully as a seductive tool. Moments of disgrace or diminished renown are navigated with head down, shades on, hiding puffy, haggard, or sad eyes.

Because of this, sunglasses can be viewed as a handy indicator of the meaning of celebrity today. We’re invited to gaze into the eyes of our film and pop stars on giant cinema screens or to linger over them on phones and tablets, to long for them to meet our gaze—even though this is impossible. Sunglasses frustratingly remind us of this impossibility while underscoring the sacred otherworldliness, detachment, self-possession, and smooth demeanor of the celebrity.

“Something to hide behind” they may be, but they also add an almost guaranteed layer of celestial power and mystique. Some celebrities are nothing without their shades. Without them, Victoria Beckham’s early forays into the world of real high fashion could have looked awkward, nervous, “wannabe.” Without them, Bono would, by now, be almost unrecognizable as his eyes disappear with age (the same could have been said for Andy Warhol). Sunglasses make great visual copy at any size—and have become synonymous with many celebrity identities. Jack Nicholson, Jackie Onassis, Garbo herself; all claimed to be less recognizable with their sunglasses off.

Today, they also act as novelty masks, enabling celebrities to change their appearance and to hold the gaze of press and public. This is essential in contemporary celebrity culture where constant reconstruction of image is the name of the game. Lady Gaga continues to captivate her audience with an almost maniacal performance of spectacular and frantic mutation using myriad forms and styles of clothing and sunglasses. These are frequently kept on during interviews in a resolute statement of “knowingly” exaggerated celebrity status.

Dark lenses are not the only hard surfaces she favors: prosthetic shoulder blades, metal, plastic, leather, PVC. Layer upon layer of clothing, make-up, prosthetics, accessories are added and removed in a performance more like a display of armor than a striptease. Even her bare skin seems somehow bulletproof. She takes it all off, but she won’t let us in.

The occasional softening of voice, admission of vulnerability, or opening of the eyes promises a brief glimpse of what appears to be the real Gaga, but it’s always choreographed to be rapidly and seamlessly followed by a deadpan removal of access. Gaga’s performance repeatedly riffs on the idea that there is no “essential” self, nothing enduring, nothing stable, nothing to grab hold of, no chinks in the armor. If she wants people to see through her clothes, well, maybe she shouldn’t wear so many.

Gaga’s complaint suggests that there is something to see “though her clothes.” But what sunglasses mask in her case is not that tender, delicate “truth inside” but its absence—the monumental ego with black holes where the windows to the soul should be. This is not to say that Stefani Germanotta has no soul, but that its existence is entirely unnecessary to her appeal in the modern world.

Vanessa Brown does not work for, consult to, own shares in or receive funding from any company or organization that would benefit from this article, and has no relevant affiliations.

Vanessa Brown is a senior lecturer in design and visual culture at Nottingham Trent University, U.K. This article was originally published on The Conversation: TheConversation.com