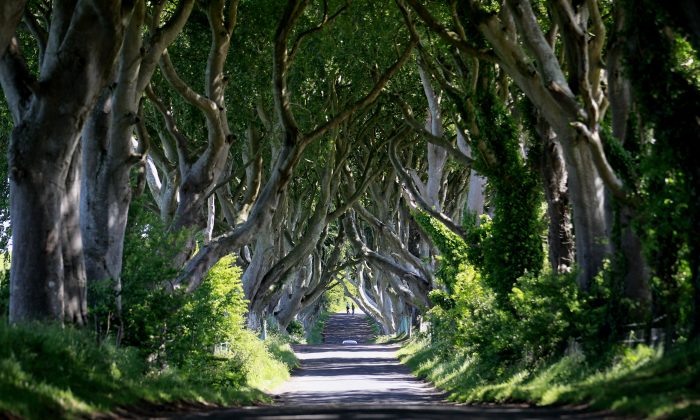 JJ Murphy, a Northern Irish actor, died four days after filming the first scenes in Game of Thrones. He was to play Ser Denys Mallister in the upcoming season. In this picture taken June 16, 2014, the scenic avenue of beech trees at Dark Hedges situated 50 miles North from Belfast in County Antrim, Northern Ireland. The avenue featured in season 2 of the Game of Thrones as Ayra Stark makes her escape from Kings landing. (AP Photo/Peter Morrison)
Entertainment

Game of Thrones Season 5 Spoilers: Does Lady Stoneheart Appear? (No Trailer Yet)

During the “Game of Thrones” season finale, a number of viewers lamented the omission of a character featured in the “A Song of Ice and Fire” books.

The character is Lady Stoneheart, the undead Catelyn Stark who seeks vengeance in the “ASOIAF” books.

“She is less gracious and forgiving than in life and is consumed with a desire for vengeance on anyone she thinks betrayed her and her son, Robb. She hangs any men associated with the Freys, Boltons, or Lannisters, even if they had nothing to do with the ‘Red Wedding’ or if they are boys, as was the case of Podrick Payne. Her appearance has been altered as well, with her flesh becoming soft and the color of curdled milk due to her corpse being submerged in river water for days,” reads the Wiki page for the character.

Michelle Fairley, who played Catelyn Stark until her death in Season 3, gave an interview about the Stoneheart character, saying she won’t be in the series.

“You respect the writers’ decision. I knew the arc and that was it. They can’t stick to the books 100 percent, it’s impossible, they only have 10 hours per season. They have got to keep it dramatic and exciting and extraneous stuff along the way gets lost in order to maintain the quality of brilliant show,” Fairley continued.

Fairley said she hasn’t seen anything about the comments about Lady Stoneheart not being in the finale.

“I actually haven’t seen any of that. I don’t look that stuff up. I avoid it like the plague. I was totally unaware,” she said.

However, according to Screencrush, director Alex Graves has said showrunners Dan Weiss and David Benioff “might still find space for the character in season 5, though they hadn’t shared any knowledge with him.”

The finale was shown last week and had record numbers in terms of the viewership. It was the most pirated episode of a show ever, said TorrentFreak, a website that monitors piracy.

The Season 5 premiere of “Game of Thrones” will be next April, which is consistent with previous premiere dates. Filming for the show will start up in the fall.