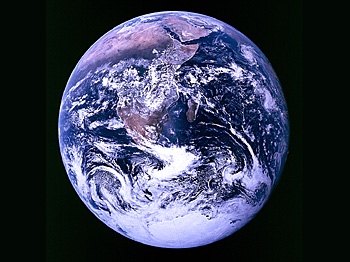 By Epoch Times Staff
Print
"Nature is Wisdom." Many are familiar with this phrase, but just how true is it?

If we stirred the cauldron of contemporary scientific hypotheses, and considered which among them most blurred the line between the tangible and the divine, we would find that the Gaia Hypothesis rising to the top. Yet, over the past four decades as the idea of a "living earth" continues to collect concrete evidence in its favor, scientists from various fields have become increasingly attracted to it.

What is the Gaia Hypothesis? Named after the ancient Greek earth goddess, this theory imagines our planet as a living, breathing and self-regulating entity.

Look, for example, at the air we breathe. Oxygen is an indispensable element for practically all living organisms, from bacteria to fish to humans. This gas has for millennia maintained a 21 percent composition of the earth's atmosphere due to certain living organisms (plants) that continually liberate it. Oxygen—being a very reactive element—has the potential of combining with other gases and minerals of the Earth's atmosphere and crust, disappearing completely in its liberated form.

But despite this unstable situation, the Earth's atmosphere remains a relatively constant supporter of life. This was one of the observations that the Chemist James Lovelock described at a scientific conference held in Princeton in 1969. Challenging the concept of nature as merely a game of chance, Lovelock postulated that the earth could well work like a gigantic living organism, organizing all forms of matter both organic and inorganic with a definite goal to create an environment for sustaining life. Despite his past accomplishments—most notably pioneering sensitive instruments for the Viking spaceship on its Martian exploration—Lovelock's idea of a living earth endured harsh criticism from his colleagues.

Another point Lovelock raised was the unvarying concentration of seawater salinity, which remains at the optimum level for the existence of life. Science has found that the water in rivers constantly drags mineral salts into the ocean, yet when the seawater evaporates to form clouds, it does not bring the salt with it. If we were to follow a strictly logical way of thinking, we would conclude that the concentration of salt in the ocean should increase with the passage of time. But this does not happen. The concentration of salt has remained unchanged for centuries. According to those who support the Gaia Hypothesis, this is due to the ability of a colossal being maintaining an internal equilibrium—a phenomenon which coincides scientifically (though usually applied to cellular organisms) with "homeostasis."

Some believe that the answer behind this peculiar phenomenon may be found in the formation of salt mines: over time water forms a bay and is later landlocked. The water inside evaporates and only the salt is left. This portion of earth then gets covered with powder and clay, which is eventually converted into solid rock, preventing a possible future river from dragging the salt away. Could this mechanism so casually regulate the concentration of salt, such that the water is never uninhabitable for fish and other sea creatures? According to supporters of the theory, it is not merely a product of accidental circumstances, but rather a process controlled by Gaia herself.

A more recent example supporting the existence of Gaia comes from a discovery made by scientists at the University of Hong Kong, directed by Jiu Liao. During their studies along sea coasts, this team of investigators noticed that the tides seemed to make the coastal floor "breathe" as air and moisture were interchanged through water pressure on the seafloor. This breathing can be noticed in the most obvious cases as air bubbles that emerge from the coastal floor. The tides seem to influence a rhythmical movement of the ocean floor, causing something which seems identical to respiration, but with a much slower frequency, due, of course, to the earth's comparatively enormous size.

Evidence for the living, breathing earth does not stop there: contemporary reports by scientists of Hawaii's Mauna Loa observatory demonstrate that the concentrations of carbon dioxide, from 1955 to 1995, have varied in a rhythmical up-and-down pattern, which, with the evidence collected through geography stations, some interpret as terrestrial inhalation and exhalation.

The Gaia Hypothesis stands against the predominately held notion that the proper conditions for life have been maintained for thousands of years due solely to chance— isolated processes working independently that just happen to create this tenuous situation. The belief of Earth as a living being is an idea that up to now has gained more skeptics than followers, but minds are changing as evidence continues to emerge.