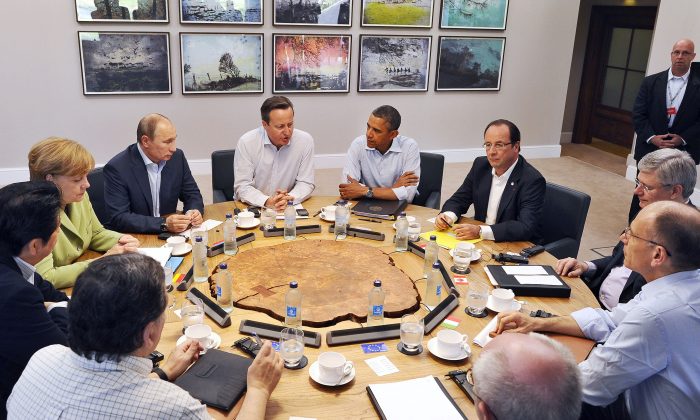 Leaders from eight of the world’s wealthiest countries spent the final hours of their summit Tuesday focusing on how to make sure multinational companies can no longer rely on shelters and loopholes to avoid paying taxes.

British Prime Minister David Cameron, host of the two-day G-8 summit at a remote lakeside golf resort in Northern Ireland, promised “significant developments on tax” in a tweet before a morning discussion on the subject with the leaders of the United States, Germany, Russia, France, Italy, Canada, and Japan.

British lawmakers have sharply criticized Google, Starbucks, and other U.S. multinationals operating in Britain for exploiting tax rules by registering their profits in neighboring countries such as Ireland, which charges half the rate of corporate tax, or for paying no tax at all by employing offshore shell companies.

Tax avoidance is a type of arbitrage, similar to classic economic arbitrage, which seeks to take advantage of pricing differences of the same item or service in different locations. The person engaging in arbitrage seeks to purchase items in low-priced markets and sell them in high-priced markets, enjoying a risk-free profit. He only has to pay transaction costs, which are higher for physical goods and much lower for intangible assets, such as intellectual property.

Applied to taxes, a company will seek to earn revenues in low-tax locations, and pay expenses in high-tax locations. In this case, even if revenues and expenses are the same before tax, the company will still enjoy a profit due to a difference in tax rates. Generally, the greater the difference in tax rates between nations, the greater the opportunities for tax arbitrage.

But Britain itself stands accused of being one of the world’s premier links in the tax-avoidance chain. Several of the U.K.’s own island territories—including Jersey, Guernsey, and the British Virgin Islands—serve as shelters and funnel billions each week through the city of London.

“Of course, Britain’s got to put its own house in order,” said Britain’s treasury chief, Chancellor of the Exchequer George Osborne, who was invited to address the G-8 meeting on corporate tax reform. Before the summit, Britain announced a provisional agreement with the finance chiefs of nine of its offshore dependencies to improve their sharing of information on individuals and companies banking cash there.

Despite the agreement, some commentators argued that Cameron acted too late to get the full support of all G-8 members. “For his part, Cameron has not been able to drive forward a global deal on tax because he left putting his own house in order until Saturday—far too late to get other countries to fall in line,” Kirsty McNeil, who was an adviser to former British Prime Minister Gordon Brown, told the Guardian.

And indeed, some countries have voiced opposition to the two main proposals on the table. The first proposal includes a register of the economic beneficiaries of shell companies in tax havens, mostly big multinationals. Another issue is whether that register should be made public and how poorer countries can participate.

Despite the assurance that Canada agrees with Cameron’s proposals “in prinicple,” the administration of Prime Minister Stephen Harper had previously resisted some reforms making company ownership public, according to The Globe and Mail.

Countries in support of the proposals include Germany and France. Even Ireland—a country often used for tax avoidance because of its low rates—seems to be on board. Enda Kenny, the Irish prime minister, told reporters that the country has “nothing to fear.”

“The goal of cracking down on tax avoidance, bringing greater transparency to it, this is something we’ve pursued in the United States, and we agree with Prime Minister Cameron that we can work together multilaterally to promote approaches that achieve those objectives,” said Ben Rhodes, President Barack Obama’s deputy national security adviser.

Campaigners for greater tax transparency appealed to the G-8 to ensure that reforms benefited the poorest countries of Africa, South America, and Asia, as well as the rich West. Anti-poverty campaigners have stressed that shell companies are a key method of spiriting away funds from any country, rich or poor. Less developed countries, however, might not be able to participate, because the exchange of information is intended to be reciprocal, according to Enough Food For Everyone IF.

“G-8 leaders must decide whether they want to shape the transparency revolution or resist the tide of history,” said Adrian Lovett, Europe executive director at development campaign group One.

The summit is concluding with rapid-fire statements by each departing leader. Obama continues his European trip Tuesday night in Germany.