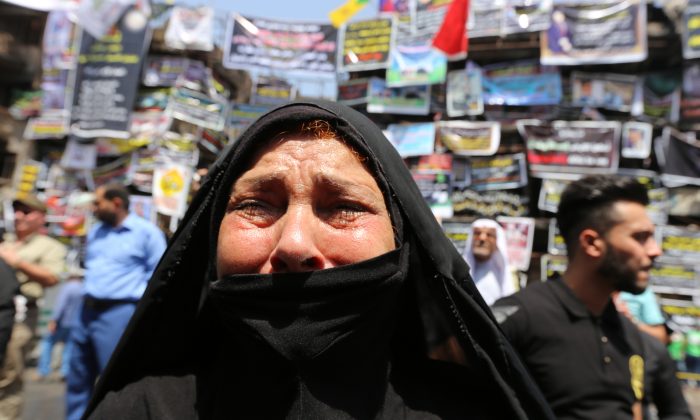 An Iraqi woman cries on July 7th, 2016, in front of a memorial for the victims of a suicide bombing which claimed the lives of over 200 people in Baghdad's Karrada neighbourhood. (SABAH ARAR/AFP/Getty Images)
Middle East

Fury Over Insecurity as Iraqis Mourn 200 Dead in Baghdad Blast

Iraqis on Monday, July 4th, mourned more than 200 people killed in a Baghdad suicide bombing claimed by the Islamic State jihadist group and accused the government of not doing enough to protect them.

Baghdad, apparently seeking to shore up its image after one of the deadliest ever bombings in Iraq, announced the execution of five convicts and also said it had arrested 40 jihadists.

The grim search continued for bodies at the site of the attack that hit the upmarket Karrada district early on Sunday as it teemed with shoppers ahead of this week’s holiday marking the end of the Muslim fasting month of Ramadan.

Prime Minister Haider al-Abadi announced efforts to address longstanding security flaws in Baghdad following the blast, which came a week after Iraqi forces recaptured the city of Fallujah from IS.

But Iraqis are furious at the government’s inability to keep residents safe, even as its forces on the battlefield push back IS outside the capital.

“I swear to God, the government is a failure,” said a woman who gave her name as Umm Alaa, who lost her apartment in the attack.

IS “tactics are changing. Why does the Iraqi government have fixed tactics?” a man asked at the site of the bombing, criticising the government’s “stupid checkpoints” and use of fake bomb detectors.

And Inam al-Zubaidi said she came to the site to offer condolences to “the families of the martyrs, who fell in this place because of the failed government”.

As Iraq marked three days of national mourning, security and medical officials told AFP the number of dead from the attack had risen to at least 213. More than 200 were wounded, they said.

Iraq’s justice ministry announced the execution on Monday of five convicts, whose crimes were not specified, in a statement that linked the timing of the executions with the Karrada blast.

The ministry said it wanted bereaved families to know “that their brothers in the justice ministry are continuing to deliver just punishment to those whose hands are stained with the blood of Iraqis”.

Baghdad also said that security forces had arrested “40 terrorists” who were allegedly linked to planned attacks during Ramadan.

In Karrada, a young man lit a candle on a staircase leading to the basement of one charred building, adding to dozens of others left by mourners at the site of the bombing, which sparked infernos in nearby buildings.

Down the stairs, young men dug through the ashes using shovels and their hands, searching for those still missing after the blast.

Black banners bearing the names of victims – including multiple members of some families – hung from burned buildings, announcing the dates and locations of their funerals.

Abadi was met with an angry response when he visited the site on Sunday, with one video showing men throwing rocks at what was said to be the premier’s convoy, while a man could be heard cursing him in another clip.

IS claimed the attack in a statement saying it was carried out by an Iraqi as part of “ongoing security operations”.

Bombings in the capital have decreased since IS overran large areas north and west of Baghdad in June 2014, with the jihadists apparently tied down by operations elsewhere.

But the group has struck back against Iraqi civilians after suffering military setbacks.
With thousands of vehicles moving in and out of the capital each day, such bombings are difficult to prevent.

But there are also flaws in security measures in the city, especially the use of fake bomb detectors at checkpoints years after the man who sold them to Iraq was jailed for fraud in Britain.

Abadi announced a series of security changes after Sunday’s bombing, including scrapping the fake detectors.

He also ordered the installation of scanning devices at entrances to Baghdad to be speeded up, instructed security personnel to be banned from using mobile phones at checkpoints, and called for increased aerial reconnaissance and coordination among security forces.

But soldiers and policemen still carried the fake detectors at some checkpoints in central Baghdad on Monday, saying the order to stop using them had not yet been passed down.

IS’s defeat there was compounded by a devastating series of air strikes targeting jihadist forces as they sought to flee the Fallujah area that officials said killed dozens and destroyed hundreds of vehicles.