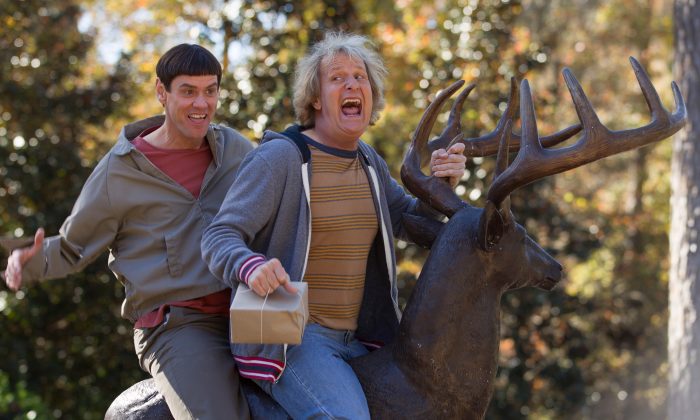 From ‘Dumb and Dumber To’ to ‘American Hustle,’ 8 Weird Movie Haircuts

We won’t mock characters from Star Wars or Star Trek or any other outer-space film for that matter. Even mention of haircuts from the 80s would make this list endless, so we will stick only to the unnecessary, embarrassing, and outlandish hairdos that made us wonder just how far these celebrities will go to make their characters believable.

Although audience are not used to seeing men with pink hair curlers, even in film, Bradley Cooper made himself look like a black sheep for his role as wacky FBI agent Richie DiMaso in “American Hustle.”

The suave Spanish hunk, Javier Bardem, shocked viewers with his bowl-cut that was as frightening as his psychopath character in “No Country For Old Men.”

3. Adam Sandler (You Don’t Mess With the Zohan)

We’ve seen Adam Sandler’s curly locks in “The Wedding Singer” where he played musician Robbie Hart, but he really pushed the envelope by getting dyed blond feathers in the Zohan flick.

Yes, it totally suited Steve Carell to wear his hair parted in a classic slick do with lengthy side-burns in “Anchorman 2,” but that doesn’t make this hairstyle any less ridiculous.

5. Jim Carrey (Dumb and Dumber To)

The bowl-cut prevails! Jim Carrey’s dorky hairdo is back in the “Dumb and Dumber To” sequel where he stars alongside his partner-in-crime Jeff Daniels.

Natalie Portman is one brave Hollywood lady who went bald for her role in “V for Vendetta.” (Bald might not qualify as a hairdo, but it’s the best bizarre anti-hairdo).

Cute, curly, blond locks are not Jon Heder’s natural look, but he sure made them believable in “Napoleon Dynamite.” He then once again showed off an enviable, sleek blond hairdo in “Blades of Glory,” but that might have just been a hair cap.

Yes it’s an old movie and we should forgive and forget, but that scene in “Kingpin” where Bill Murray had his combover all disheveled, it resembled a sea monster come to life.