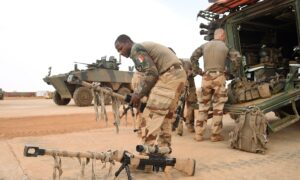 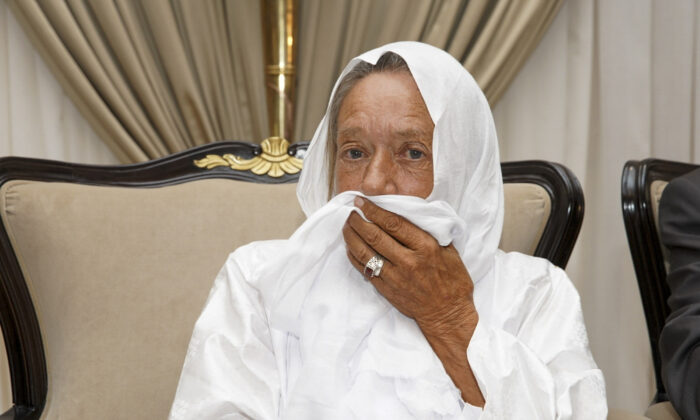 French ex-hostage Sophie Petronin is seen at the presidential palace after being released and flown to the capital Bamako, Mali, on Oct. 8, 2020. (Mali Presidency via AP)
Europe

BAMAKO, Mali—A 75-year-old French aid worker held hostage for four years by Islamic extremists in Mali arrived Friday in France—and says she wants to return to her aid work with malnourished children in Africa despite the ordeal.

Relatives enveloped Sophie Petronin in a huge embrace after she descended from the plane at the Villacoublay military airport southwest of Paris, where she was greeted by French President Emmanuel Macron.

Wearing a white veil and a trench coat, Petronin appeared very moved as she held her grandsons in her arms.

“The French and I are glad to see you back at last, dear Sophie Petronin,” Macron wrote in a tweet. “Welcome home.”

Petronin met with Macron for about an hour at the airport. They did not speak to the press.

Macron expressed joy and relief at her release, thanked the Malian authorities, and promised that the French military would continue its fight against terrorism in the West African region.

Petronin was released with three other hostages from Mali and Italy this week. Bells pealed in the Italian hometown of a priest also released.

Petronin said she had been treated relatively well during captivity. Her account contrasted with that of fellow ex-hostage Soumaila Cisse, a prominent Malian politician who recounted months of arduous conditions before a precarious trip to their extraction point, arriving in Mali’s capital 48 hours after first being released.

“I hung on—I prayed a lot because I had a lot of time,” Petronin told reporters at the French Embassy in Bamako. “I transformed detention … into a spiritual retreat, if one can say that.”

Petronin was released alongside Italian hostages the Rev. Pierluigi Maccalli and Nicola Chiacchio, and Cisse, a prominent Malian politician. There was no immediate information about the five other foreign hostages that the Islamic terrorists from JNIM are believed to still hold.

Freedom for the four came just days after the Malian government released nearly 200 extremists and sent them by plane to northern Mali, fueling speculation of an imminent prisoner exchange that some fear could further destabilize the country.

It was not immediately known whether a ransom was paid, though terrorist groups have long funded their operations with such payments from European governments.

Cisse, who had been kidnapped earlier this year while campaigning for re-election as a legislator, told Mali’s state broadcaster ORTM that after months of captivity things began to move quickly at the end of September.

He said late Thursday that he had made a proof of life video on Sept. 26, and earlier this week he was freed. Still, security conditions prevented them from reaching the northern town of Tessalit for two more days.

“I spent six months in … very difficult living conditions, in almost permanent isolation, but I must confess that I was not subjected to any violence, neither physical nor verbal,” Cisse told ORTM.

The Italian hostages included Maccalli, a Roman Catholic missionary priest from the African Missionary Society who was kidnapped from neighboring Niger in 2018.

In a tweet, the Italian bishops’ conference expressed “gratitude to those who worked for liberation as we continue to pray for those who are missing.”

Among those missing is Colombian nun Gloria Cecilia Narváez Argoti, last seen in a 2018 video alongside Petronin.

In Maccalli’s birthplace of Crema, a city east of Milan in northern Italy, bells tolled in the cathedral to welcome the news of his liberation.

“I hope that the release of Fr. Gigi is a promising sign of hope for all the others who are prisoners for their faith and their struggle for truth, justice, and reconciliation; and may it be a seed of peace and trust for the Niger he loves so much,” Crema Bishop Daniele Gianotti said.

Looking energetic and determined despite her ordeal, Petronin told French broadcasters that she wants to go back to the northern Malian town of Gao to see the children she was helping before she was kidnapped.

“I made a commitment to the children. For four years I haven’t seen how the programs are working,” she said, referring to her work with orphaned and malnourished children. “I will go to France, to Switzerland, and then I will come back to see what’s happening here.”

During her captivity, Petronin said she was allowed to listen to the radio, and her guards shared messages and videos with her, including one from her son.

Petronin’s middle-aged son Sebastien Chadaud told French reporters that “it was a little boy who found his mom again, and a mom who was comforting her little boy.”

He added, “She’s like a block of granite, my mom.”

He cried when describing how he fought for her release, telling his mother, “I did my best.” She comforted him, saying, “You did what you could.”

As her son kissed her head, she said she just wanted to spend time with him, “to look at him and tell him, ‘Forgive me, I caused you so much pain, so much difficulty, so much work to help me get out.’”

By Baba Ahmed And Angela Charlton