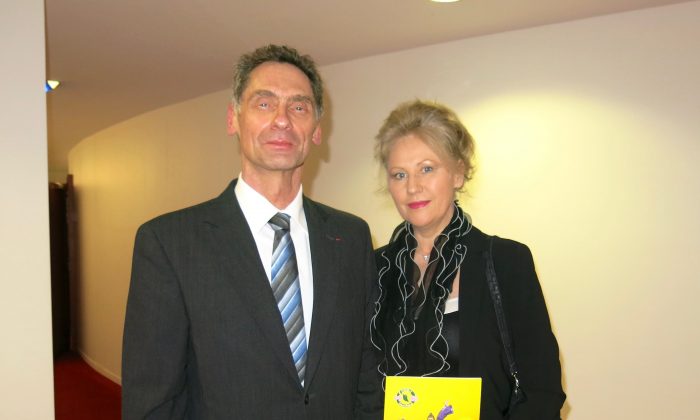 AIX-EN-PROVENCE, France—Serge Gouteyron, a civil administrator in the district of Aix-en Provence in southeastern France, attended the Shen Yun classical Chinese dance show at the Grand Theatre de Provence on March 9 and was highly impressed.

Based in upstate New York, Shen Yun Performing Arts has been touring for nearly a decade in dozens of countries around the world.

“It’s a high quality and harmonious show,” Mr. Gouteyron said. “It brings us serenity and shows that the French and Chinese people are quite similar.”

According to the official website, the Chinese name “Shen Yun” means “the beauty of divine beings dancing.”

“The two nations lived under an imperial or royal order until quite recently—these are our roots,” Mr. Gouteyron said.

While noting the violent revolutions that occurred in both countries’ modern histories, he said that both Chinese and French “are deeply attached to their roots, love the arts and particularly dance.”

“What makes a nation evolve is the cultural and spiritual aspect, thought and culture,” Mr. Gouteyron said. “In this sense we are very much like the Chinese people.”

“There is much spirituality, as we have in France as well. According to what I read on the screen, I’ve noticed this deep connection to God, to gods, and the fact that atheism was a path of no return.”

In addition to the ancient past, Shen Yun also depicts scenes of spiritual persecution in today’s China, where the communist regime promotes Marxist materialism and atheism at the expense of traditional culture and faith.

Yet Shen Yun has a decidedly positive message.

“We must believe in ourselves,” Mr. Gouteyron said, describing the message he got from the performance. “Believe in the cultural and spiritual dimension of a nation, and this is what will contribute to create a better future.”

“This is a very good exercise,” Mr. Gouteyron said. “Very relevant, especially in the world we live in. There is intolerance and violence on one side, and refinement on the other. … What can contribute to education of people today? … They will only be able to rise through refinement and culture.”