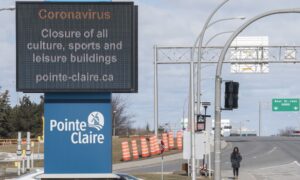 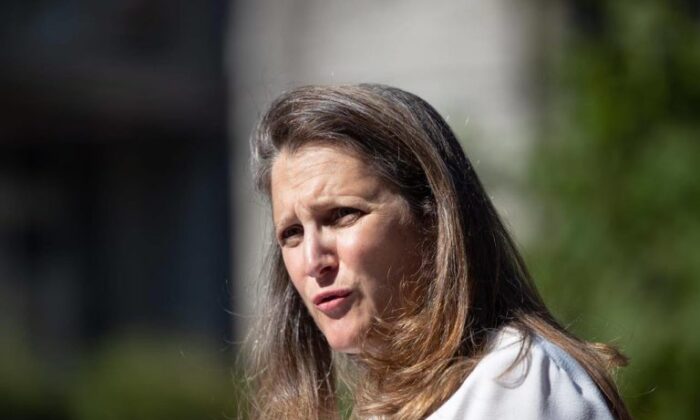 Chrystia Freeland, Deputy Prime Minister and Minister of Finance, responds to questions after a social housing funding announcement in the Downtown Eastside of Vancouver, on July 28, 2021. Freeland says the government is extending pandemic aid programs by an extra month beyond the previously planned end date. (The Canadian Press/Darryl Dyck)
Canada

OTTAWA—The federal government is tapping the brakes on its plans to phase out pandemic aid programs this summer, deciding instead to freeze benefits at current levels and extend help by an extra month beyond the previously planned end date.

The decision means that wage and rent subsidies for businesses, and income support for workers out of a job or who need to take time off to care for family or stay home sick, will last until Oct. 23.

Rates for the wage and rent subsidies will hold at current levels until September, holding off on the previously planned decline.

Similarly, the three “recovery” benefits for workers will keep paying out at $300 per week, and four more weeks of eligibility will be added to a maximum of 54 weeks.

The same extra weeks will be available to workers who have exhausted their employment insurance benefits.

The Liberals had planned to phase out the pandemic aid, foreseeing enough of a recovery by the fall that many of the measures would no longer be needed.

Finance Minister Chrystia Freeland said Friday that there were still too many businesses and workers who are not fully back on their feet yet, noting that it took the country a little longer to stamp out the third wave of the pandemic than the government expected.

“And I know all of us are watching carefully the Delta variant and are concerned about that,” she said at an event in Hamilton, Ont.

“From the government’s perspective, it is essential to do everything we can to be sure the country’s economic recovery is fast and robust, and that no one is left behind.”

COVID-19 variants remain a wild card in the path to economic recovery, which appeared to gain steam in June.

Statistics Canada said its preliminary estimate that the economy grew by 0.7 percent in June following two months of losses, and that real gross domestic product grew at an annualized rate of 2.5 percent in the second quarter.

Total economic activity at the end of June was still about one percent below pre-pandemic levels, and the labour market was about 340,000 jobs, or almost two percent, below the levels seen in February 2020.

The Canadian Federation of Independent Business said the government’s announcement provides some additional runway for many small businesses still trying to get back to normal sales levels.

The group, which represents 95.000 small businesses nationwide, is also asking for the government to extend the aid until the recovery is more advanced.

“Small firms are keen to replace subsidies with sales, but many firms continue to face a significant lack of demand due to capacity restrictions, border closures and customers hesitant to return to normal activities,” president Dan Kelly said in a statement.

By extending the benefits now until October, and holding the wage and rent subsidies at current rates until September, the Liberals have locked in changes before an expected election call next month that would largely put a pause on policy-making.

They could yet be extended further: Budget measures approved by Parliament in June give the government the ability to extend the aid by one more month, if necessary, to the end of November.