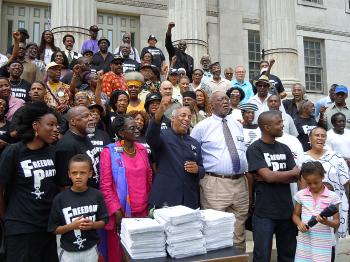 FREEDOM PARTY: Charles Barron and other Freedom Party members celebrated getting over 43,000 signatures and enabling Barron to run for Governor. (Stephanie Lam/The Epoch Times)
US

NEW YORK—City Councilman Charles Barron announced today in the Brooklyn Borough Hall that the Freedom Party has collected over 43,000 signatures, allowing for its formal creation and for Barron to run for governor on the new party’s ticket.

“We are here to say that the people of New York state have spoken. They said loudly through this petition,” Barron said.

Barron founded the Freedom Party because the Democratic Party decided on an all-white ticket for the state Senate election.

A statement in the Freedom Party’s website reads, “The Freedom Party will not stand by and allow the Democratic Party to ignore and exclude black people from the state’s (and city’s) power positions.”

According to the Freedom Party, most African-American voters in New York state are registered Democrats, and “the Democratic Party has a history of taking the black vote for granted.”

According to Barron, the Freedom Party is opened to everyone, but it “will be absolutely led by blacks and Latinos.”

“We’ve got to get rid of the three evils of racism, classism, and sexism in delivering goods and services to the people of this state,” Barron said.