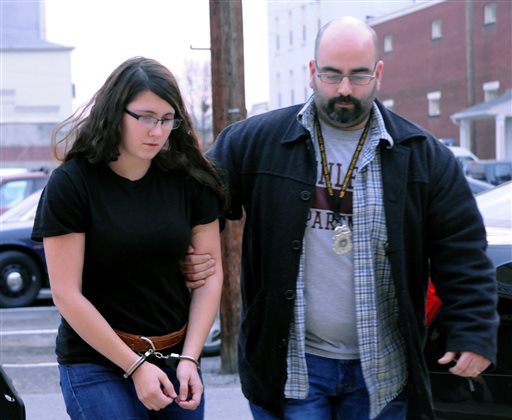 In this Tuesday, Dec. 3, 2013 file photo, Miranda K. Barbour is led into District Judge Ben Apfelbaum's office in Sunbury, Pa., by Sunbury policeman Travis Bremigen. In an interview with The Daily Item newspaper published Feb. 15, 2014, Barbour, charged along with her newlywed husband Elytte Barbour in the murder of a man they met through Craigslist, admitted to the slaying and said she has killed more than 20 others across the country, claims police said they are investigating. (AP Photo/The News-Item, Mike Staugaitis, File)
Crime and Incidents

Francis Scarcella of the Daily Item has revealed that alleged Craigslist killer Miranda Barbour said she killed between 22 and 100 people.

Scarcella broke the news  about the alleged killer in his original story, but revealed more information in a follow-up interview.

He told TMZ that Scarcella said that after she killed 22 people she stopped counting.

The writer said that Barbour claims she changed into another person when she was about to kill, called “Super Miranda.”

Barbour also claimed to only kill bad people, or people who abused children or owed money.

She also said that she felt satanism controlled her.