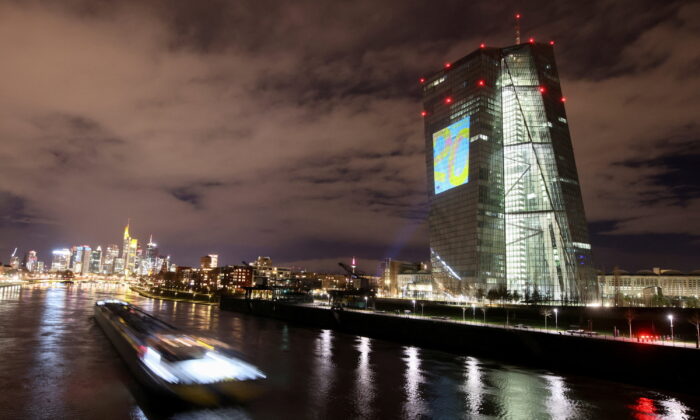 A symphony of light illuminates the south facade of the European Central Bank headquarters in Frankfurt, Germany, on Dec. 30, 2021. (Wolfgang Rattay/Reuters)
Europe

The eurozone economy in general grew more than three times than economists had expected, despite inflation in the 19-member currency bloc, rising by 8.9 percent, up from a 8.6 percent rate last month, an all-time high.

Analysts claim that the unexpected growth will put the greater European Union (EU) economy on a stronger footing, despite surging inflation and a looming cutoff of Russian gas that may push the entire continent into a recession.

The second quarter of 2022 saw seasonally adjusted GDP increase by 0.7 percent in the eurozone and by 0.6 percent in the EU from the previous quarter, according to preliminary data from Eurostat, the statistical office of the European Union.

“July inflation also topped expectations, but the full impact of Russia throttling Europe’s gas supply is yet to be felt. Add in tighter financial conditions and a sharp slowdown looks inevitable.”

Skyrocketing inflation has led the European Central Bank to announce a half-point increase in its deposit rate for July.

A gauge of underlying EU inflation rates, excluding energy and food, hit a record of 4 percent after a slowdown in June.

Europe’s largest economy, Germany, however, has been going through a major downturn since March owing to severe energy shortages.

The International Monetary Fund announced on July 26 that Germany will have the weakest economy in the G7 by the end 2022, due to its industry’s heavy dependence reliance on Russian natural gas.

The 20 percent reduction in gas imports from the Nord Stream 1 pipeline is forcing German authorities and industry leaders to warn of future difficulties.

In the face of Germany’s potential energy crisis, cities and state governments there are enacting energy-conservation measures, such as ordering that spotlights on public monuments be turned off, fountains shut down, and mandatory cold showers at municipal swimming pools and sports venues.

Hanover in Lower Saxony was the first large city to implement energy-saving actions by, for example, eliminating hot water in the showers and bathrooms in public buildings and entertainment centers.

Civil buildings will have heating only from 1 October to 31 March at a reduced temperature, while mobile air-conditioning units and fan heaters will be banned.

Only nurseries, schools, senior home, and hospitals will be exempt from the energy-saving efforts.

Spain and Italy, meanwhile, saw in the second-quarter more than 1 percent growth over the previous three months, due to a boost in post–lockdown tourism.

French GDP rose by 0.5 percent following a contraction at the beginning of the year, mainly due to trade, but consumer spending there saw a decline, according to Bloomberg.

European stocks rose on July 29, with the Stoxx Europe 600 Index up 0.8 percent in the morning (GMT), after hitting a seven-week high in the previous session.

The markets may reach their biggest monthly gain since November 2020, as investors feel optimistic about higher corporate earnings and a hunch that the U.S. Federal Reserve will slow its rate hikes amid fears of a U.S. recession.

The rebound began earlier this month after a massive slump in the first two quarters of 2022, as high inflation and slowing growth caused a downturn among investors.

Poor U.S. economic data released over the past week is raising bets that the Fed will curtail its hawkish strategy of rate hikes.

The future outlook for the European economy remains uncertain, as the temporary boost given by summer tourism in certain member states is only temporary.

The lingering energy crisis over Ukraine, combined with the supply-chain crisis, and record-high inflation growth, will continue to add downward pressure on demand and output throughout the year and possibly beyond.