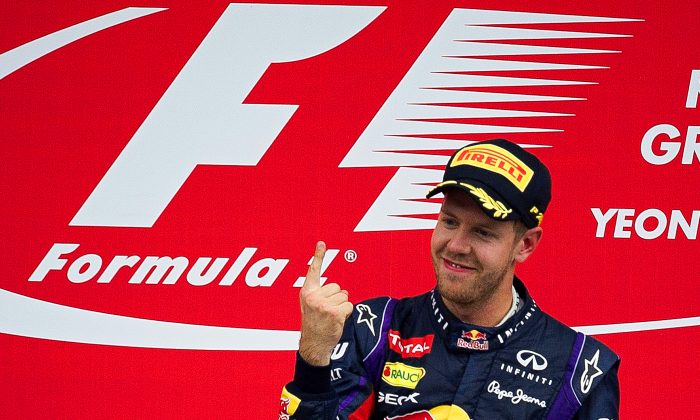 He is uncatchable. At the start of every race, Red Bull driver Sebastian Vettel hits the gas and goes faster than everyone else. The best drivers in the world in the fastest cars on the planet are not able to reel him in; time after time, Vettel opens a two-second gap on the first lap, and then adds to that gap at will. Everyone else competes for second.

At the Formula One Korean Grand Prix early Sunday morning, the soon-to-be four-time world champion didn’t open his customary huge gap over the field; even the mighty Vettel had to proceed cautiously on a track which literally eats tires and brakes.

The Yeongam track did what is always does: it destroyed right front tires (Sergio Perez had one delaminate, which nearly wrecked Mark Webber and Lewis Hamilton) and stimulated lots of spins (Adrian Sutil spun into Mark Webber, somehow sparking a fire—the Red Bull driver had to stand by and watch his car burn for the second time in two races.)

Despite going faster, Vettel got more life out of his first set of tires than the rest of the front-runners. He pitted for fresh rubber because new tires would be quicker, not because his first set was worn out, and retook the lead he would never surrender. It was Vette’s fourth “Grand Slam” of the season: he won the pole, led every lap, and set fastest lap.

His margin of victory wasn’t that large; a pair of safety cars closed up the field. Even so, the 26-year-old German ran off a string of fastest laps in the closing minutes, just in case anyone else harbored a fantasy of winning. In the closing races of the 2013 F1 season, the top step of the podium is the domain of Sebastian Vettel only.

Lotus had an excellent day among the also-rans, its drivers finishing second (Kimi Räikkönen) and third (Romain Grosjean.) Sauber’s Nico Hulkenberg once again showed how his potential is being wasted, matching his career-best finish at fourth.

McLaren, Mercedes, and Ferrari had to fight over the rest of the points-paying positions, meaning more of Vettel’s championship rivals were eliminated; now only Lewis Hamilton, Kimi Räikkönen, and Fernando Alonso have even a mathematical chance of overcoming the German’s lead.

Vettel has 77 points on Alonso, 105 on Räikkönen, and 111 on Hamilton with five races, worth 125 points, left on the schedule. The Red Bull driver could take three races off and still be comfortably ahead; his opponents cannot afford even a single mediocre result, let alone a bad day. The championship could be decided at the next race, if it is anything like the last four.

“I’m trying not to think about it to be honest,” Vettel told to post-race press conference on NBCSN. “I’m trying to focus more on the present. There are still a lot of points to get, even though it looks very good for us. There’s still a chance for Fernando, I think, so we have to stay on top of our game but to be honest, I think I said on the podium, we’re just having a good time. To be honest with you, I don’t really care. I look forward to Japan because it’s one of the nicest tracks of the whole season.”

Doesn’t care? Vettel doesn’t fixate on it, perhaps, but surely the idea that he is almost certain to become the youngest driver to win four consecutive world championships never entirely disappears.

There is a wealth of talent in F1 right now. Five World Champions contest each race. Legendary teams like Lotus, McLaren, Mercedes, and Ferrari field cars. Yet the combination of the genius of designer Adrian Newey and the excellent touch of Sebastian Vettel have propelled an upstart team sponsored by a sports drink company to the top of the motorsports world.

So long as Vettel has Newey’s cars to drive, it doesn’t seem likely that any racing record will escape them.