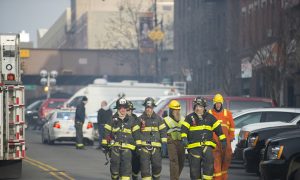 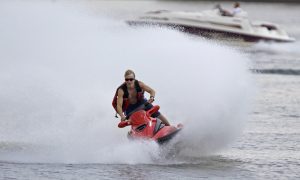 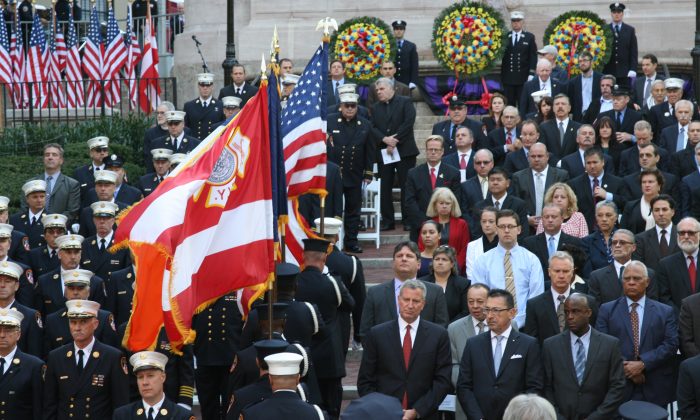 Four Firefighters Died While on Duty Honored at Memorial

NEW YORK—Lieutenant Gordon Matthew Ambelas searched through the flames last July on the 19th floor of a Williamsburg high-rise for survivors and people in danger.

Ambelas perished in the fire, at the age of 40, from smoke inhalation and burns. He was a 14-year veteran firefighter who had served during the September 11 attacks and Hurricane Sandy.

Thousands attended his funeral in July, many of them firefighters driving up from places like Staten Island in solidarity.

Ambelas, and many other fallen firefighters were honored again Wednesday morning, at the FDNY annual memorial service with hymns, salutes, and heads bowed in a moment of silence.

Over 7000 were in attendance at the Firemen’s Monument, according to the FDNY press office. Thousands of firefighters and EMT officers stood in single file lines dressed in uniform.

Mayor Bill de Blasio spoke of Ambelas’s rescue of a 7-year-old boy, in May, from being crushed by a roll-up gate. The boy’s head and arm were stuck and he had been pulled 15 feet off the ground by the gate.

“There’s a young man walking the streets of this city today because Matt saved him,” said de Blasio, “And all that will happen thereafter—that young man has children and grandchildren—it’s because Matt Ambelas was there to save the day.”

EMT Luis de Peña was also remembered Wednesday for his brave actions. An 18-year veteran in Washington Heights, Peña spent countless hours at Ground Zero in 2001, rushing to the aid of 9/11 victims.

The dust clouding up the World Trade Center site contributed to Peña’s illness.

De Blasio said, “He put everyone else first—continued to serve the city until his health failed him.”

The mayor was joined by many leaders of the fire department and EMS as they placed wreaths to honor the deceased.

They laid three wreaths, one in honor of the fallen firefighters, the second in honor of EMS members, and the third for the department as a whole, said Battalion Chief Michael Gala.

Then, everyone bowed their heads in a moment of silence.

The service also invited a reverend and a rabbi to speak, to represent different faiths.

Reverend V. Simpson Turner said of the FDNY, “They’re the bravest personnel in the world, in the city that never sleeps. And we’re the greatest nation in the cosmos.”

Two others were honored for dying during active duty.

EMS Lieutenant Walter Nelson, from a station in Fort Greene, Brooklyn, passed away suddenly in May after serving for 32 years.

His family received a special mention from the mayor for also serving the community—Nelson’s son is also an EMT, his daughter is a teacher, and his wife is a Department of Education official.

“This is a family that exemplifies everything good about New York City,” said de Blasio of the Nelson family.

While riding his motorcycle to work, firefighter John Monteverde, who served in Staten Island, was struck by a drunk driver and thrown off his vehicle in a fatal accident in October of last year.

As a 31-year veteran who had been cited four times for bravery, Monteverde’s death was a loss for FDNY.

Speakers Wednesday reminded the audience that they weren’t just remembering the dead, but also being inspired by heroes who had served with great courage.

Fire Commissioner Daniel Nigro spoke of his own experience 40 years ago first attending the memorial service as a firefighter.

“That was when I realized I was part of something far greater than me,” said Nigro. “Other young firefighters and EMT members may be feeling the same emotions for the first time.”

This week is National Fire Prevention Week, in which firefighters will be showing demos and rescues Thursday outside 9 Metro Tech Center in Brooklyn, and Saturday and Sunday on West 46th Street and 12th Avenue.