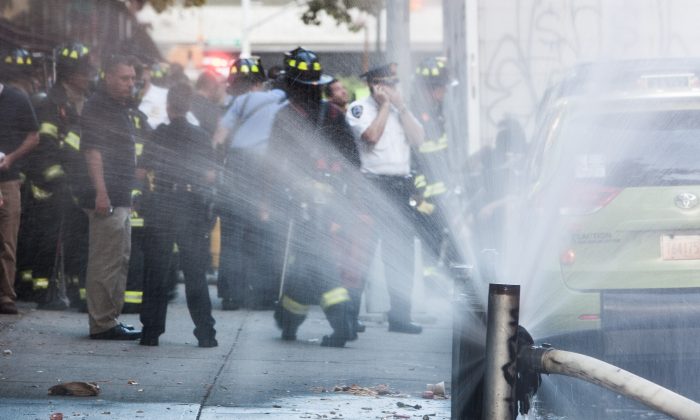 NEW YORK—Fire marshals in New York City are warning city residents again of the potential for deadly consequences when an electrical outlet is overloaded.

Broken windows on a building after a 4-alarm fire in Hamilton Heights, Manhattan, on Monday. (Petr Svab/Epoch Times)

The August 18th fire in an Upper Manhattan neighborhood started because of a power strip plugged into an extension cord, which ran under heavy furniture, according to officials.

The fire was fanned by open apartment doors, which eventually aided its spread to all six floors of the building.

It took firefighters about 90 minutes to get the fire under control. 81 adults and 19 children were displaced, according to the Red Cross.

A survivor of a 4-alarm fire in Hamilton Heights, Manhattan, on Monday. (Petr Svab/Epoch Times)

In July, a Brooklyn fire that started because of a power cord pinched between a bed and a wall left firefighter Matthew Ambelas dead.

The fire department recommends several safety measures to prevent electrical fires. In addition to not overloading outlets, they also recommend using the right wattage for light fixtures, protecting electrical cords from damage, and not running them under carpets or rugs.

A “UL” mark on an electrical cord means that it has been safety tested.