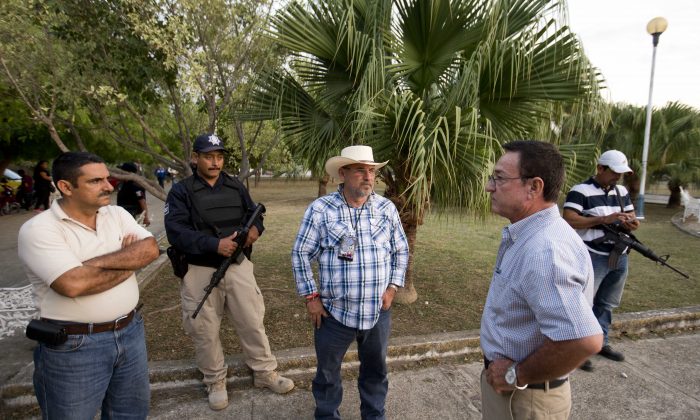 APATZINGAN, Mexico—Fed up with drug cartel demands for extortion payments, lime-grower Hipólito Mora picked up an old shotgun and led his neighbors in a vigilante uprising in 2013.

After helping bring down the Knights Templar cartel, twice landing in jail, and losing his own son to violence, the 59-year-old man now is leading a different sort of campaign by running for Congress in Mexico’s midterm elections on Sunday.

In his familiar wire-rimmed glasses, white Panama hat, and graying beard, Mora is rallying supporters in southern Michoacán to harness the energy behind the vigilante uprising and turn it into political power.

“Two years and three months ago we began this fight, a fight because no one could work anymore. All sorts of jobs were controlled by the Knights Templar,” he told about 50 people gathered on a soccer field in Apatzingán, some 200 miles (335 kilometers) west of Mexico City.

“I entered politics for you, just as I started the armed group—fighting because it pained me to see what was happening.”

Criminal gangs, many of them fragments of cartels broken up by arrests, continue to grip Michoacán, a prime area for drug trafficking with its 135 miles (217 kilometers) of Pacific coastline, including one of Latin America’s largest ports, and its thick folds of lush mountains. As for the vigilantes, known locally as self-defense groups, many have been regularized into “Rural Police” forces recognized by the federal government.

The government considers vigilante forces such as the group once led by Mora to be disbanded. But armed self-defense patrols still are de-facto rulers in pockets of Mexico.

Officials promise to ensure peace for Sunday’s vote, which will see 500 congressional representatives elected, along with governors of nine states and hundreds of mayors.

But tension has heated up with activists threatening to block voting in neighboring Guerrero, where drug violence is pervasive, and farther south in Oaxaca, where a radical teachers union is demanding repeal of federal educational reforms. Already, the run-up to Sunday’s vote has been marred by bloodshed, with three candidates and one would-be candidate gunned down, and thousands of ballots stolen and burned.

Enrique Hernandez, another former vigilante leader, was shot to death in May during a rally for his mayoral campaign in Yurécuaro, on Michoacán’s border with Jalisco state—an area that has seen several recent eruptions of violence between Mexican forces and the powerful New Generation Jalisco cartel.

Mora campaigns wearing a bullet-proof vest and travels with bodyguards.

Mora campaigns wearing a bullet-proof vest and travels with bodyguards. While some may have given up on the political process, he sees the electoral campaign as the next phase of the vigilante movement.

“I got into politics because I want to do good, I want to fight for the people who can’t defend themselves, who don’t dare to speak out,” Mora told The Associated Press.

Mora has campaigned on pledges to take away the immunity from prosecution that officials currently enjoy, end the practice of allowing elected representatives to take extended leaves of absence, and boost federal funding for local development projects.

During a recent campaign rally in the coastal town of Coahuayana, the crowd of about 200 supporters included some two dozen armed men—some in “Rural Police” uniforms, others in civilian clothing.

“He’s a good choice,” said Cemei Verdia, a plainclothes vigilante with a pistol tucked into his belt. All of the other candidates, he said, “owe a big debt to the (self-defense) movement.”

Before the vigilantes largely defeated the Knights Templar cartel, Verdia explained, politicians frequently reported being pressured to obey the gang’s orders, such as handing over part of their municipal budgets, or be forced to resign.

Eulises Larios says it was the vigilantes who helped restore order to Coalcomán, a Michoacán town where his family operates a lumber mill.

The Knights Templar, he said, kidnapped his brother and killed him even though the family paid $2 million in ransom. The cartel continued to demand 100,000 pesos ($6,500) a month in protection payments, threatening to burn the mill if they failed to pay.

Larios said he and other sawmill operators pooled money together to finance the vigilantes.

“We are not warlike people,” said Larios, 35. “It was our last chance, and thank God, it worked.”

While the vigilante movement may have turned Mora and others into local heroes, not all see his political-run as a step in the right direction, given his record of skirting the law to take matters into his own hands. Twice he landed in jail for suspicion of homicide, with charges dropped in both cases.

“He is going to be a bad example,” said Pablo Monzalvo, a security specialist at the IberoAmerican University in Mexico City. “Whatever his moral standing is, is not the point. … Legally, he is not the right kind of person (to run for office).”

But that matters little to Mora supporters who believe the vigilantes simply were willing to take on a problem that official law enforcement failed to solve.

Ramiro Equihua, 76, who turned up at the rally in Apatzingán, said life has improved since the vigilantes rose up under leaders like Mora.

“I never met him, but he has a good reputation,” Equihua said.