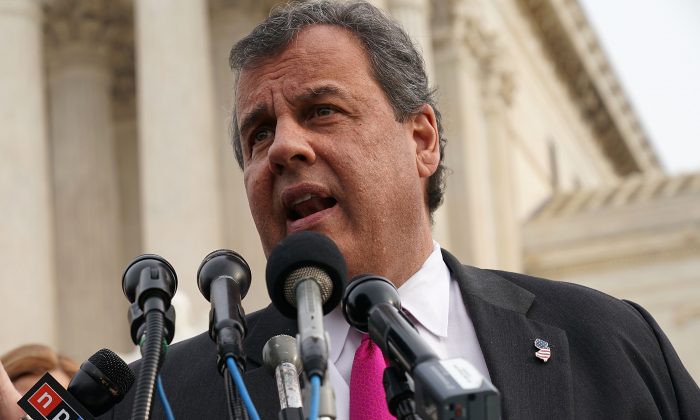 Former New Jersey Governor Chris Christie speaks to members of the media in front of the U.S. Supreme Court in Washington, DC on Dec. 4, 2017. The Supreme Court was scheduled to hear Christie vs. NCAA on whether states can legalize sports betting. (Alex Wong/Getty Images)
US News

Former New Jersey governor Chris Christie was turned away at a special access point at Newark Liberty International Airport and was ordered to stand in Transportation Security Administration screening lines like everyone else.

Christie, who left office on Jan. 16, tried to circumvent a security checkpoint at Terminal C on Thursday morning, Jan 18. He attempted to enter through a special access area with his State Police security detail, located near the exit of the restricted area of the terminal, reported CBS News, citing a person familiar with the event.

A Port Authority of New York and New Jersey police officer, which operates the airport, refused him entry near the restricted area of the terminal. Christie was told by an officer that he was not allowed to use the special access anymore and was escorted to the regular entrance.

The two-term Republican, who served as the 55th governor since 2010, cooperated with the order.

New Jersey governors have the option to have a trooper protect them for six months after they leave officer—which Christise has opted to use, reported the news station.

Christie told CBS he had no “major regrets” after his eight years in office.

“I did it the way I wanted to do it and I was myself the whole time,” he said.

He was replaced by Democrat Phil Murphy, who was sworn in as the new governor on Tuesday, Jan. 16.