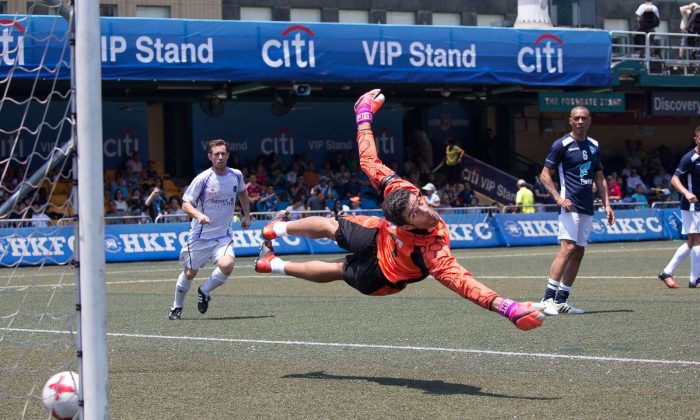 David James (former Liverpool and England goalkeeper) is unable to keep out Discovery Bay's second goal in their Master Plate Final. James' PlayonPROS went on to win the match 3-2 thanks to an Emile Heskey free kick. (Dan Marchant)
HK Football

HONG KONG—Former English Premier League and International goal keeper David James (Portsmouth, Liverpool and England) was in town last week to play in the Hong Kong Football Club Citi Soccer Sevens. Now in its 19th year the tournament is carving out a niche for itself as a great place to see former footballing legends as well as a host of future stars, as an assortment International teams’ Academy players and former professionals, converge on Hong Kong to compete for the competition’s Cup, Shield and Plate trophies.

James and fellow former EPL professionals (including Emile Heskey Mikael Silvestre and Colin Hendry) were in Hong Kong as part of the PlayonPROS team, competing in the tournament’s Masters Competition. The team was set up recently to help tackle the issues faced by professional athletes after they retire, and selected the HKFC Citi Soccer Sevens as the venue for their competitive footballing debut. There were a total of ten teams competing in the Masters tournament included the Hong Kong Football Club Chairman’s Select, Yau Yee League Masters, Wallsend Boys Club and the defending 2016 champions Citi All Stars. The PlayonPROS put in a good showing in their first competitive outing beating Discovery Bay 3-2 in the Plate Final. Top honours though went to defending champions Citi All Stars who beat Wallsend Boys Club 3-2 in the Cup Final.

Meanwhile in the Main tournament a total of 16 international Academy teams vied for the honours including Kitchee, Leicester City, Olympique Marseilles, Rangers Football Club, Wellington Phoenix, Bayer Leverkusen and 2016 defending champions Aston Villa. Villa again reached the Quarter Finals with two wins and a draw in the group stage and then dispatched Italian team Cagliari Calcio in the Quarter Finals with an impressive 3-0 win. They then qualified for the championship’s Cup Final with an even more impressive 4-0 win over France’s Olympique Marseille in the semis. Coming into the final on a high, the defending 2016 champions came up against follow British team Leicester City who had had an even more impressive run to the final, winning all three of their group matches and then besting both West Ham and Glasgow Rangers 3-1 in the Quarter and Semi Finals respectively. Unfortunately for Aston Villa it was Leicester that turned out to be the dominant team in a 3-0 win that saw championship top scorer Josh Eppiah score twice and Josh Gordon netting City’s third goal.

Dan Marchant, contributor to Epoch Times,  is a professional photographer and sports enthusiast.