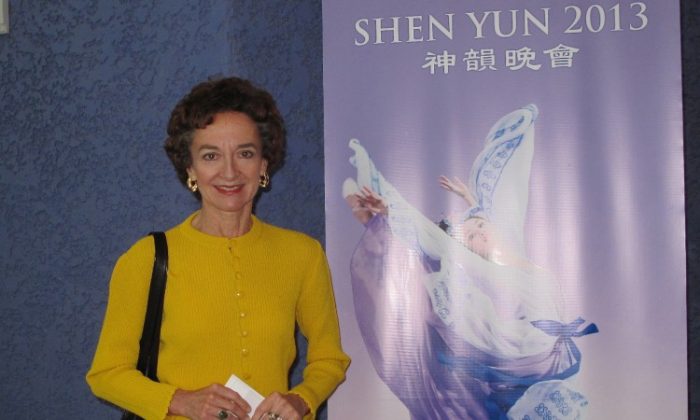 MESA, Ariz.—Susan Weidner, an adoption consultant for International Family Services, was among the audience members enjoying Shen Yun Performing Arts at the Ikeda Theater in the Mesa Arts Center the afternoon of March 3.

Ms. Weidner is a former diplomat who has served as the senior commercial officer and first secretary at U.S. embassies in Almaty, Kazakhstan, and Sofia, Bulgaria, according to her biography on Zoominfo, which says she was also the executive director of government and corporate development for enterprise initiatives for the Thunderbird Graduate School of International Management.

Besides the superb artistry in the Shen Yun performance, Ms. Weidner was also pleased to see the spirituality of Chinese culture presented by the New York-based classical Chinese dance and music company.

“I found the program particularly exciting because I feel that what will bring peace in the world will be people of different faith traditions working together,” Ms. Weidner said.

She added that all the great faiths in the world teach humility before the creator, and the need to build the society on the basis of things taught by the spiritual Chinese practice Falun Dafa, which includes truthfulness, compassion, and forbearance.

“When we realize that we are all on that same path of spiritual development, we’ll see each other as colleagues, not as competitors, but as brothers and sisters working together to spread the recognition of the importance of these values around the world. And I think that that will ultimately influence the governments of the world to embrace those values wholeheartedly.”

Shen Yun tours the world each year with an all-new performance on a mission to revive traditional Chinese culture. The company is currently in the midst of its 2013 tour with three companies simultaneously touring in North American, Europe, and Asia.

“Sophisticated dance techniques, an orchestra joining instruments East and West, beautiful costumes, and a stunning backdrop—this is Shen Yun at first glance,” Shen Yun’s website says. “But digging deeper, one discovers a sea of traditional Chinese culture. Mortals and divine beings merge on stage as one. Principles such as benevolence and justice, propriety and wisdom, respect for the heavens, and divine retribution, all come to life, washing over the audience.”

“I think it was very courageous to blend culture with spiritual values, and I hope it touches the hearts of a lot of people in the audience and the audiences that the group performs in front of all over the world because that will help to nail all the hearts of people together.”

Spiritual development, Ms. Weidner said, “is an essential aspect of any country or society to advance into the 21st century. In China, in America, in anywhere.”

She added that if all people of the world embrace spirituality, the future would be more optimistic and peaceful.

Ms. Weidner lived in China in the 1980s, where she said she saw many cultural performances, but none match the spirituality she saw in Shen Yun.

She said, “I lived in China from 1984 to 1987 representing Philips Petroleum Company. … The unique part of this show versus shows that I saw in China [is] certainly that spiritual component … the spiritual element in the Shen Yun program is absolutely unique in my experience seeing Chinese programs and I applaud that and I [hope] that that will continue and be well received by many people around the world.”

In addition to the spiritual aspect of Shen Yun, which embodies traditional Chinese culture, the performance primarily includes classical Chinese and ethnic folk dances. In a collection of brief pieces, no longer than 10 minutes each, dancers wearing a myriad of brilliantly colored costumes recreate ancient legends—all accompanied by a orchestra. A digital backdrop sets the stage for each piece, carrying the audience to distant lands across the Middle Kingdom.

Ms. Weidner was highly impressed with the performance’s aesthetics.

“I liked it very much; excellent production value, beautiful choreography, costuming, lighting—the scenery. Very well conceived,” she said. She thought the dancers were disciplined and in sync.

She added, “The orchestra was magnificent. I liked the synthesis of the Western and Chinese instruments.”

“I think it’s very exhilarating, very inspiring, and I love the idea of continuing to work for human rights in China and encouraging spiritual development,” she said.